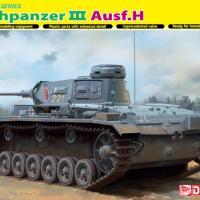 Originally designed with breathing and wading apparatus to support the Wehrmacht’s amphibious invasion of Great Britain during Operation Sea Lion, the Panzer III Tauchpanzer never had the opportunity to wade ashore on the British Isles following the Luftwaffe’s defeat in the Battle of Britain. Despite the denial of the opportunity to tread on British soil, Tauchpanzer III’s saw duty on the Eastern Front against the Red Army.

Detail is crisp and ample on the hundreds of finely molded parts. Although high in parts-count at first glance, quick examination of the instruction sheet reveals roughly 1/3 are excess and not to be used. Tracks are of the DS variety and are thin and well-formed. Interior detail is limited to the turret, and is concentrated in the breech assembly. Turret and hull hatches may be posed open or closed. Markings are provided for 3 Tauchpanzer III’s.

Instructions are Dragon’s standard fare, printed in black, white, and blue. Construction sequence is typical for most armor pieces, starting with the running gear, building up lower and upper hull areas, topping things off with the turret and adding the tracks for the finishing touch.

In conclusion, Dragon’s Tauchpanzer III Ausf. H is a welcome addition for German armor fans. This kit is recommended for models of intermediate skill level or higher.

Thanks to Dragon USA for the sample and to IPMS/USA for the opportunity to review this kit.