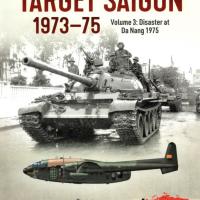 A Brief Introduction of the Book

This book contains 80 pages, including many great (144) black & white photographs, nine color pages of colored profile drawings and three colored maps. The color drawings illustrate a few vehicles (both ARVN (Army of the Republic of Vietnam) and PAVN (People’s Army of Vietnam), several uniforms and aircraft from this lengthy conflict.

This volume covers the next pivotal phase of the Vietnam war and provides the reader with an easy-to-follow history of early 1973-1975 period. As the peace accords were signed in Paris, American participation in Vietnam war was officially ending. In this book Mr. Grandolini describes in detail both the political and military decisions leading up to disastrous and very costly military losses on the battlefields. One of the most significant victories, if that term applies, was the agreement to finally return our POWs, many of whom had languished in North Vietnamese prisons for over six years.

As the U.S. left, a huge amount of our military equipment was abandoned in Vietnam, including large stocks of vehicles and entire squadrons of aircraft. At the same time, our combined military financial support dropped from the 2.1 billion dollars to approximately 700 million dollars. This decrease spelled the doom of our military efforts in Southeast Asia and laid the groundwork for the very costly war’s ending. The often quoted and held theory about the ‘domino effect’ the threat of communism’s overtaking the world by military force was walked away from. As our armed forces were drawn down and departed, the handwriting was on the wall. Almost all the remaining efforts were then centered from the U.S. Embassy and some continual clandestine operations.

I found several aspects of this book of interest, including the fact that in straight combat the ARVN troops and Marines fared much better than I remembered, the evacuation from the area around Hue and Da Nang represented amazing feat, how fast the PAVN troops were able to quickly seize what assets (both ground armor, vehicles and aircraft) the ARVN forces left about the various battlefields and just how quickly the PAVN forces brought their weapons into the final battles. I also came away with a much better understanding how important it is to leave the combat decisions to the military, as President Nguyen Van Thieu demonstrated a lack of understanding about what was happening in this critical battles. In these remaining battles in Hue and Da Nang, over 4,000 tons of weapons and ammunition were captured and quickly use by the PAVN.

I suspect many modelers will gain and expand the knowledge of fascinating book, including using the color profiles, vehicle photos (of both South and North Vietnamese forces) to base dioramas or equipment displays.

Military historian and aviation-journalist Albert Grandolini was born in Vietnam and gained an MA in history from Paris 1 Sorbonne University. His primary research focus is on contemporary conflicts in general and particularly on the military history in Asia and Africa. Having spent his childhood in South Vietnam, the Vietnam War has always been one of his main fields of research. He authored the book Fall of the Flying Dragon: South Vietnamese Air Force (1973-1975) two volumes on Vietnam’s Easter Offensive of 1972 for Helion’s Asia@War Series, and three volumes on Libyan Air Wars for Africa@War Series, and has written numerous articles for various British, French, and German magazines

I highly recommend this book covering one of the pivotal aspects of our Viet Nam war. It is an excellent and important read and, in my opinion, add a significant amount of information and insight the next to the last stage of the Vietnam war. Mr. Gandolini’s book is very graphic in his photo images lays out his story in an easily followed and orderly manner.

I want to thank both the provider Casemate, publishers Helion & Co., and IPMS-USA for the opportunity to review this book.