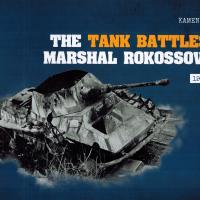 The book is divided into eight chapters. The pictures are located throughout the chapters with many of them pertaining to the particular battle being discussed by the author. Except for the first chapter in which his birth and early career are touched upon, the rest of the chapters are dedicated to the battles in which he took part. A good explanation of the battle discussed is given on each of the chapters dedicated to the particular battle. In addition, maps of the battle are also provided.

The first chapter is divided describing his early career, and the beginning of the war against Russia. It ends with the description of the battles of Smolensk-Moscow and Stalingrad. In the second chapter the author describes the failure of the Soviet troops to achieve their assigned task to thrust deep into the German lines and cut their retreat routes. The Germans thus counter-attacked that defeated the Russians.

The third chapter deals with the Battle of Kursk whose outcome is well known. Chapter Four is dedicated to the Battle of Bobruisk in which the Russian forces advanced from Kursk into Belorussian's capital. Problems encountered in this battle and the final outcome of the battle are discussed. Chapter Five talks about the pursuit of the Russian forces by the Germans on their retreat. The battles encountered in this chapter are Minsk and Brest to mention a few. This chapter also describes the failure of the Russians forces at Kovel.

In Chapter Six we encounter the description of the Lublin/Brest offensive and the arrival of the Russian forces at the gates of Warsaw as well as the bridgeheads at Pulany and Magnuszew. The operations from the Oder to the Elbe are included. The offensives in East Prussia and Pomerania are described in the next chapter. Each offensive is given a section explaining the operations in that particular area of battle. The last chapter gives us the operations conducted from the Oder to the Elbe, as well as the last battle in which Marshal Rokossovsky forces were involved.

I found the book interesting and although I knew about Marshal Rokossovsky in general terms, I found more information about him. I always thought that he was Polish, but reading the book I found that his father was Polish, while his mother was Russian and that he was born in Warsaw, which at that time was part of the Russian Empire. My concern about the book is that of the many pictures in the book I found that 115 were about destroyed German equipment and some of them were a bit fuzzy. The fuzziness I will attribute to the fact that many of these pictures are over 70 years old and the normal decay of the photos could attest for this fuzziness.

Thanks to Casemate and Peko Publishing for the opportunity of reviewing this book.