Tales from the Apocalypse - The Biker 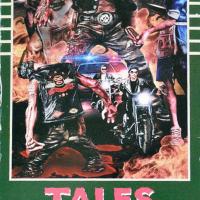 The Biker is the last figure in Gecco’s second series and follows the three figures in series one in their Tales From the Apocalypse that I believe are sculpted by Shojiro Kasai. This second series creates Scene 2: Day 1, 1:27 pm at the Diner’ and goes with two other figures, a cook who was attempting to save his daughter, Cindy from the infected but who gets bitten and his daughter, Cindy, the diner’s waitress and the sister of the heroine in the first series. The Biker’s Tale From the Apocalypse:

“The Biker was driving on the freeway when the outbreak started and the dead began walking the streets.
Losing control of his bike, he veered into the opposite lane of traffic and crashed into a car, shattering his skull and neck upon impact. His body went reeling across the pavement, rolling end over end, a large truck ran over his legs severing them below the knees as a final goodbye!”

GeccoDirect is probably better known for their lines of vinyl action figures depicting video game characters, or their resin science fiction busts and figures. However, these new plastic kit offerings are very nicely done. The figure packaging is extremely well done. The outer cover is portrayed as a heavily used VHS rental movie along with movie rental stickers and notes that you would have found on a VHS rental. The edges of the box are even depicted as heavily worn. The look is quite effective. I took it to show off at my local IPMS meeting and it fooled nearly everyone: “Why would you bring some worn out VHS movie to a model discussion?” The folded instructions help tell the story in a newspaper-like format.

The packaging of the twenty-three parts is protected within a compartmentalized plastic bag that minimizes the damage that could occur if the parts had just been loose in one large bag. I would recommend that you wash all the parts to remove any remaining mold release. There are small mold lines present on the parts, but they are easily cleaned up with sandpaper or a scalpel blade. The figure stands a little over four inches (with legs and his neck not broken) and has several options including severed legs or full legs. I decided to not putty up the gap for the leg options so I could show both for this review, so you will see a small gap in the photos below. You can either live with it and enjoy both options, or you can whip out the putty and fix the small gap. This figure also doesn’t balance as well as the previous two figures I have reviewed in this series, so I will chalk that up to builder error. The figure has no problem staying up with the leg stumps and I suspect that if I played with the long legs a bit, it would stand just fine.

I began by cleaning up the few sprue attachments and the fine mold lines. Test fitting showed that overall part fit was going to be good. The only seam I really needed to deal with was the sides of the Biker’s vest and that would have to wait until after getting the base colors on.

I used Vallejo paints throughout and had no issues. I painted the trousers German Panzer Grey and the belt Mahogany Brown. The shoe soles were painted Panzer Grey and the shoe uppers were painted, Leather Brown. A wash of Smoke dirtied them up appropriately. All exposed skin was base coated with Off White, followed by dry brushing Light Flesh. I highlighted with rosy Flesh and Medium Flesh Tone.

I was somewhat concerned how the plastic would take cement, but using Tamiya extra thin cement presented no problems. The head nestled into the thorax with no issues, as were the arms. The shoes fit nicely into the pants. I left the lower legs unglued to be able to use the below the knee option. I will note that the arms, lower legs, and shoes are all keyed so you don’t have to worry about mixing up left vs right parts.

The irises were Dark Brown with a dot of German Panzer Grey for the pupil. The hair and eyebrows are German Camouflage Black Brown. I then started on the bloody bits. I used Hull Red for the deeper cuts and then added a layer of Carmine Red. I used Transparent Red as an overlay. I used Off White for the exposed collar bone and radius bone. I then splashed on transparent yellow and smoke randomly to get a ‘dirty effect.

I will continue to ‘fiddle’ with the face as I’m still not happy with the eyes, but overall I’m quite pleased with this kit. The outer packaging and the instruction sheet are excellent. The same goes for the packaging of the parts with most of them off the sprue and individually packaged by plastic blisters. Kit design is also very good with the consideration of the separate parts that take into consideration painting requirements. The sculpt looks quite good, especially the head, arms, and thorax. I am looking forward to completing another kit in this series!

My thanks to Gecco and IPMS/USA for the chance to review this great kit.

Back cover of Box