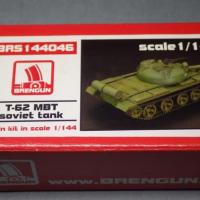 Brengun, based in the Czech Republic, is known for producing a range of photo-etched and resin accessories for airplane models. They also produce a small number of 1/72nd and 1/144th model sets in both plastic and resin. One of their resin kits is the T-62 Main Battle Tank in 1/144 scale.

The T-62 entered service with Soviet Union in 1961, and remained in service with the former Soviet Union until the early 2000s. Originally, designed as an upgrade to the T-55 series of tanks, the T-62 was the first tank armed with a smoothbore gun and replaced the T-55 as the standard tank of the Soviet army. While the T-62 is no longer in service with the Russian army, it is still commonly seen on today’s modern battlefields in Syria and Yemen.

At 1/144 scale, most kits are small, but the Brengun kit is really tiny. It comes packed in a small, side opening box, that’s not much bigger than a matchbox. However, what the kit lacks in size, it more than makes up in detail. The kit contains 9 resin parts, a small photo-etch sheet with 14 parts, a small decal sheet, and a simple set of instructions.

The resin parts make up the major sections of the tank itself, with 2 sets of tracks with the side skirts attached, the turret, the hull, the main gun, the auxiliary fuel tanks, and a nicely detailed DShK 1938/46 antiaircraft heavy machine gun. The resin parts are incredibly detailed and are flash/bubble free. The larger parts like the tracks, hull and turret come attached to pretty significant resin pour stubs, and these were really the only issue I had with the kit. The stubs are large and thick enough that cutting them off with an Exacto jeweler’s saw blade wasn’t an option, or at least not one that I was willing to do. I started to attempt to cut them off that way, but the resin was too thick and hard to make it feasible. I also tried with a larger razor saw, but I was concerned about breaking the resin or cutting into the detail. In the end, I decided to go with option three, using my Dremel saw. These parts are small, so there’s not a lot of room for fingers and rotating saw blades. I considered trying to clamp the parts to something, but again I was worried about breaking some of the nice detail and there really isn’t much room to attach a clamp, so I went with Mother Nature’s clamp, my fingers. After slow and careful, up close work, I managed to do a pretty decent job only cutting what needed to be cut, and leaving with my fingers fully intact.

Once the parts were cut and cleaned up, assembly was pretty quick. I put all the resin parts together, minus the fuel tanks, before moving onto attaching the photo-etch. The PE parts are really small and I knew if I attached them before attaching all the resin parts, I’d be knocking the PE off every time I added another piece. Once assembled, the resin looks pretty good, and at this scale, you could almost leave it as is, and not add the PE since the auxiliary fuel tanks are really an optional item. I went ahead and added all of the PE parts to finish the model. I did manage to lose one of the fuel tank brackets to the carpet monster, but I cut a replacement piece from some plastic card. I am glad that I got a picture of the assembled model prior to painting the kit, because somewhere between assembling it, and priming it, the PE part for the light guard was lost.

As long as you don’t mind working with CA glue, and small PE parts, this is a pretty nice kit to work on. It goes together quickly, and is very nicely detailed. I will say cutting the resin was more nerve wracking then hard, and you may have better luck or patience with a razor saw than I do. I would recommend this kit for an experienced builder or anyone who has just a little room on their display shelf, since this one doesn’t take up much space.

Thanks to Hauler-Brengun, and the IPMS for this review model.