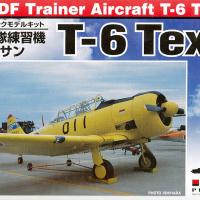 The North American T-6 Texan was the premier advanced trainer through World War II and later. It was also used as a FAC (Forward Air Control) aircraft in Korea and Vietnam. The AT-6 was also known as the SNJ by the US Navy and the Harvard by the RAF. 61 countries have used some variant of the Texan. If you can’t find markings that interest you, just keep looking.

My personal attachment to the T-6 comes from my friend Tom Kelly, who gave me a ride in his T-6G. We went to Oshkosh for the Air Rendezvouz in 1986. You get a really respectful greeting when you arrive in a warbird, even if you’re only in the back seat.

You get two T-6s in the box, plus enough JASDF markings to do 7 JASDF Texans, 4 yellow and 3 silver. You get 4 canopies, one each for the T-6G and the earlier T-6F or SNJ. I did notice fairly early that the kit does not include the large spinner which all 7 of these planes had, so you’ll have to either add the spinner or build a different T-6. So I marked mine as a T-6 flown by my Air Guard unit back in the 50s.

There are not a lot of parts to this kit. The interior is one piece, the wing is one piece, the fuselage is 2 pieces, the engine, front cowl ring and prop are 3 pieces, and there’s a ring for the prop, so it can spin. Then the main landing gear, 6 parts, the tail wheel, and the horizontal stabilizers, 2 parts.

I began by painting the interior of the fuselage Interior green, and the seats OD. The fuselage halves are glued, the interior is glued to the wing and the wing is mated to the fuselage. The fit is darned good. The fuselage halves mate so strongly without glue that this could almost be considered a snap kit. But you have to glue on the small parts. Once the horizontal stabilizers were glued on, I slipped the cowl ring in place without putting in the engine. This allowed me to paint the entire plane silver without worrying about over-spraying the engine.

I masked the interior using little pieces cut from a make up applicator sponge. These things are soft and can be stuck in small spaces without damaging interior parts, but they expand to nicely prevent the over-spray from getting inside.

Once that was done, I sprayed the plane overall aluminum, using Testors Metalizer. While this was drying, I put Burnt Metal Metalizer on the engine, then added some black wash between the cylinders.

After a coat of clear acrylic (Future), I painted the landing gear doors interior green on the inside and the gear wells. Then the black for the tires for the main gear and tail wheel.

I used the kit decals for the wing walks and anti-glare panel. I used USAF post WW2 “stars & bars” from my collection of left over decals from 40 years of building. I printed the ILL ANG and serial on my laser printer.

The kit decals went on just fine. I was pleased with how well the two decals used for the anti glare panels went on and fit nicely. This gives me great confidence for when I do the JASDF T-6 some day. I then put on a coat of Future to keep the decals safe, and applied some Testors acrylic flat to the anti glare panel.

I then put the tail wheel on, and it fit beautifully. The landing gear went in just fine. I had a little trouble putting the gear doors on, but that’s because I was working with miniscule parts in a difficult area, and I had trouble keeping the plane steady.

I painted the canopy with Testors silver from one of the old square bottles (the top says 19¢). Where the brush and I overdid application, I scraped the excess off with a toothpick. After the paint was dry, I put the canopy on with Krystal Kleer.

And it was done. This whole project took 4 days, working about 1 to 2 hours per day, mostly to be sure the glue was set and the paint/coatings were dry.

Highly recommended. I’m really glad to see a Texan in this scale. You could add some detail to that interior, but it would be hard to see. The fit is solid and tight. I used no putty in this build. How solid? I dropped the finished kit to a tile floor, and there was zero damage to anything. Clumsy and lucky.

The subject matter is great, and if you don’t want to make a spinner for the JASDF T-6s, you could do anything from Argentina to Austria to Germany to Thailand to Zaire. Or USAAF, USAF, US Navy, USMC or Coast Guard, not to mention all the Commonwealth countries who flew Harvards.

Many thanks to Dragon USA for providing this great kit for an interesting subject, and to IPMS/USA for letting me review it.