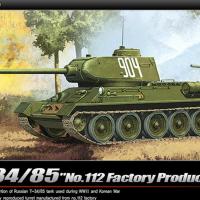 The iconic T-34 medium tank has certainly left its mark in the pages of history. It’s one of the highest produced and longest serving tanks of all time. Identifying T-34 variants can be frustrating and complicated. There were several differing turret castings between factories. New features were commonly added in the middle of production runs while other features were deleted. In addition damaged or older tanks were rebuilt or retrofitted and the addition of newer-model equipment and new turrets was a common practice. Our sample tank is from factory 112 located in Gorki. It appears to be a late version with a ‘mushroom’ type turret featuring early or late style copula and venting arrangements options.

My sample arrived in a large sturdy box with a glossy eye-catching box-art-top clearly designed to inspire the imagination. Inside I found the parts neatly package in sealed poly bags. The parts are highly detailed and come in two colors. Also included are; the instructions, one photo-etch fret featuring the engine grill, one piece of thread to be used as the tow cables and one decal sheet with six options.

To expand, as I mentioned before the plastic comes in two colors, dark gray for the track links and dark green for everything else. My first assessments of the black parts are; they have excellent tread detail and they’re correct for this tank. My only complaint is the two offending ejector pin marks found on each and every track link. The only saving grace is that pin marks are on the backside of the links. Now looking at the green plastic; I found it has lots of great details that are very nice with only a few minor pin marks. The textured casting effect on the turret is great and looks the part when compared to reference photos but I’m sure some will say it’s too heavy. The barrel is molded in one piece and proved to be very straight when rolled on a flat surface.

The instructions are the standard fold out type printed in B&W with a separate single page painting and decal placement guide also in B&W. They’re thoughtfully laid out, easy to understand and clearly printed.

The thread supplied is long enough to make two tow cables and is perfect for this scale.

Finally the decals; they’re clearly printed are of good quality and they have six options that include three WW 2 Red Army and three North Korean Army from the Korean war. The Red Army options have two for Berlin, Germany. May 1945 and one for Yugoslavia, spring 1945. The North Korean options are all circa 1950. No.229 North Korea, No.738 was captured in Nakdong River South Korea and is currently at the Patton Tanks Museum and last option is ‘Destroyed Daejeon in South Korea 20 July’ graffiti.

The build started with the three piece lower chassis followed by loading the torsion springs into box wells and gluing them into the lower chassis unit. The torsion links were then added along with other bits and the rear lower aft casting. Academy also included an inner bulkhead to help square the lower unit. Next were the wheels and track but first I filled and finished the offending pin marks. Then I prepped and assembled the wheels, setting them aside and detouring from the instructions.

The upper hull section was up next and easily completed by simply adding the rear armor plating, vents, shutters, doors, fenders, tool boxes, exhaust pipes, fuel drums, grab handles and several small bits. The photo-etch grill was the icing on the cake and really looks 10X’s better that its plastic counterpart. Happy with everything so far, I then mated the upper and lower hull sections and finished it out with the rest of the smaller items. The turret has two options; WWII or Korean War. My choice was the WW II and I had it completely assembled including the vents and copula in just a few minutes. I moved out to the paint shop before adding the wheels and track. The wheels and track went together relatively well and were only a little fussy around the outer ends.

It’s a great kit I have only one issue and that’s with the pin marks on the track links. I would like to thank, IPMS, MRC and Academy for the opportunity to present this outstanding model kit.