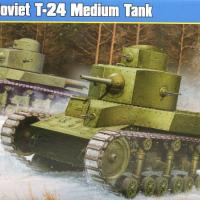 The T-34 was a Soviet medium tank built in 1931. Only twenty four tanks were completed. None of these tanks would ever see combat; instead, they were used as training aids or in other capacities. This was the first tank produced at the KhPZ factory in Ukraine. The same factory was later responsible for the amazingT-34 and T-54 Soviet tanks.

The T-24 was a well-armored tank for its time; its main armament was a 45mm gun. In addition, there were four ball-mount 7.62mm DT machine guns, one located in the top turret, two more in the main turret, and one in the hull. The T-24’s problematic engine and transmission ruined any future hope to put the tank in service. However, the suspension system was a success and was used in the Soviet Union’s first purposely-built artillery tractors.

The kit comes packaged in a very nice corrugated box featuring beautiful artwork of a pair of T-24’s running through a snowy woodland. Hobby Boss made the 380+ parts using hi-tech multi-directional slide molds, and because of this newer molding technology the parts are more accurately represented in 3D. The parts are molded in an easy-on-the eye tan color with superb detailing. The plastic itself is very nice and, like the baby bear says, it’s not too hard and it’s not too soft but just right. Other items included are the instructions and the decals which are very nice. Lastly, there’s a color plate and a nice photo etch fret.

Starting at step one in the instruction book, the build began with the road wheels and bogies. These parts went together pretty well and were finished out with photo etch parts. The photo etch added enhanced details to the top gland rings and service covers. The hull received a few details, and then finishing this step by building up the two larger front wheels and the two rear drive wheels. On to step 2: it included adding the four large wheels to the hull, tow hooks, hatch covers, and the bogie placement. This step finishes with twin 68-piece track sets. Step 3 covers the upper hull and really builds up nicely. The crew hatches are molded separately and can be posed in the open position. Moving along to step 4, the upper and lower hulls are mated, fenders are attached, driver’s hatch hinged into place, and a beautiful photo etch grille is tucked away under the rear engine compartment. Steps 5 and 6 finish up with the building of the two turrets and adding the last fiddly bits.

I encountered no problems in quality or fit and I highly recommend it to anyone who has built a few armor subjects.

My thanks to Squadron for supplying the review kit and IPMS-USA for allowing me to review it.