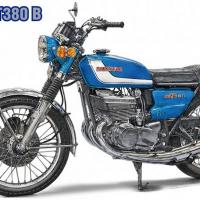 The Suzuki GT380 B went on sale in 1972. It had a 3-cylinder motor and exceptional handling. The kit was initially released in 2017 and is a new mold. It looks like it’s the first of a series of 1970s bike kits and that is great news because these kits are very well detailed and a lot of fun to build.

The kit comes on five sprues and has rubber tires and vinyl hoses. The chrome is super bright and even though the exhaust is made up of two pieces, the seam will not be an issue because of a raised lip on one half. The overall level of detail is amazing and the model looks great out of the box.

The first two stages are for the engine and it has a lot of great detail. The three carburetors are made up of three parts each and have three to four lines coming off of them. The engine builds up very quickly and looks great once painted. There is a lot of cables to really dress the motor up. After the motor is the wheels and they went together with no issue.

The frame is assembled sandwiching the engine and read fender, so it has to be painted before it’s cemented together. This leaves a seam on the head stock, but it’s easy to sand and blend in. It’s also covered mostly by the headlight so it’s not a problem. My frame went together great and at this point you have the base to which the rest of the parts are added.

The exhaust mounted positively and needed no modification or fitting, on some kits this area can be an issue. Installing the rear swing arm and wheel required a bit of care to get lined up and installed. The challenge was not putting to much pressure anywhere while fitting the assembled swing arm. The model is a bit delicate at this stage. The rest of the build was simply adding parts, no real issues.

There was no masking required for the paint. I used automotive urethane on mine and 2-part catalyzed automotive clear. The resulting finish was like glass and was a good base for the decals. The white stripes were the only decals that caused me any concern because I wanted them to be lined up perfect. There is a little bit of a compound curve on the tank so a good setting solution is needed. Also, the Suzuki script on the tank and the GT380 script on the side panels are decals on top of a chrome piece. Setting solution will snuggle the decals down and give a good 3-D effect.

This kit went together like a dream and I bought a second one to do another color. I also intend to purchase the other bike(s) released in the series.

I want to give a big thanks to Hasegawa for providing the kit and I.P.M.S for letting be build it!

Left Side Upper
Previous Next