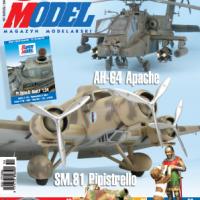 The twenty-seventh issue of Super Model Magazine from the Polish company Kagero appears to be the second issue released in 2010. In conducting my research for this review, the magazine seems to be available only from the publisher, as I found no distributors. I would compare this all-color, glossy-paged magazine with Fine Scale Modeler, as it is a mix of kit reviews, build-ups, and new product releases. The magazine is printed in a size A4-format. (I only know this because of another magazine the I frequently purchase for reference photographs is the same size.) It is 11 3/4inches by 8 1/4 inches and is printed in Polish. English words only show up in the kit description in the articles, as well as the kit manufacturers. Topics for this issue include aircraft, armor, automobiles and figures. The majority of the emphasis is on aircraft.

The issue begins after the table of contents page with a two-page spread on new kit releases with a variety of topics being covered. There is a series of six single-page initial reviews (in-the-box) on new kits that follows showing Verlinden Productions 1/35 M31 ARV set for the M3 Lee, Hobby Boss’ 1/72 Rail Transporter, 1/35 Hetzer tracks, Revell Germany’s 1/72 Junkers F.13 Sea/Landplane, Revell Germany’s 1/24 Samba Bus, and Taska’s 1/24 Panzer II Ausf. F. These articles show the box art and photographs of a few of the sprues from the kit, some showing the detail molded into the parts.

The first build-up review is dedicated to an AH-64 Apache A, D that is based upon the 1/48 scale Hasegawa kit, and covers four pages, one of which shows eight close-up shots of some of the details. Hasegawa’s 1/72 Lancaster B, Mark Dambuster is next and fills pages sixteen through twenty-three with some very nice in-progress photos of the cockpit, wing flaps, and landing gear. This kit also receives a five-star rating from the magazine. The planes keep coming with a 1/72 Italeri SM.81 Pipistrello, Italian three-engine plane covering a seven-page article. Pages thirty-two through thirty-five are all about the 1/72 Hasegawa Vought XF5U-1 in an all black paint scheme and showing some incredible engine detail. The final aircraft article appears to be part 2 of an ABC’s of modeling write-up on an F-15E Strike Eagle from Operation Iraqi Freedom. I found nothing that hinted about the scale or kit manufacturer, but the photos showing the directions appear to be Revell-like. Based on the shots of the builder holding some of the parts, I believe that this is 1/48 scale.

Breaking away from the aircraft, the next article is another five-star review, this time on a Tamiya 1/24 Nissan 350Z dressed up with a Hobby Design body kit representing this car as used in the movie “Tokyo Drift”. This six-page article shows plenty of shots of the wheels and body detail as well as some undercarriage and interior photographs.

The armor section is next, with two reviews and a diorama article, all featuring World War II German pieces. The first article is a review of the Club 1/48 scale Sturmtiger, which looks very nice in its five-pages of coverage. The other review is on the Dragon 1/35 Jagdpanther on pages fifty-two through fifty-four, where the author appears to have added his own zimmerit. The diorama article is all about a 1/35 Tamiya Jagdpanther G shown in a simple, but very nice diorama rolling over a railroad track section showing one rider inside the tank, and another on the ground providing directions. The six pages of this diorama article go through some of the painting of the tank, including washes, construction and painting of the base, and the finished product.

Page sixty-two begins a three-page article on the construction and painting of a 120mm figure from HOFI Miniatures rendering of Rycerz XIV stulecie in armor with his dog. The next article is a three and a half page write-up on the Imperial War Museum in Duxford that includes some eighteen photographs of museum aircraft and an additional two of some of the museum’s armor subjects. The final item in this issue is a single-page historical camouflage article showing four color plates of Fw-190 A-5, A-7, A-9, and A-8 planes from the “Fw-190 at War” from the Topcolors series produced by Kagero.

In conclusion, this magazine does have some nice photographs of the topics that are presented; however, the lack of English translations makes it of limited use to most modelers here in the USA. Unless you or someone who you know can read and/or interpret Polish, I think that you would also find this a difficult magazine to recommend. I do think that this magazine would be a big hit for the folks in Poland though, as it does have a nice logical sequence as it moves from one topical area to the next, as some magazines tend not to do. Therefore, for those able to read the text, I would highly recommend this publication; but if you are limited to English for your reading enjoyment, you will miss most of what Kagero has to offer.

My thanks to the folks at Kagero for making this issue available for review by the IPMS-USA review corps, and thanks to you for taking the time to read it.