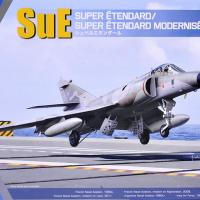 Kinetic Models has provided all new molds for the Super Etendard in 1/48 scale. Upon opening the box you find 5 sprues, one clear sprue and a small PE fret (HUD and some external details). Two of sprues are devoted to an array of weapons and underwings stores.

Plastic is the typical light grey from Kinetic, with good surface detail, fine and crisp recessed detail and no flash.

Construction starts with the cockpit, air ducts and engine face, plus wheel bay (both nose and fuselage ones). There are no surprises with those subassemblies, but make sure every part is properly cleaned and square as assembling all those components could throw the fuselage alignment off. There are internal alignment points for the air ducts and fuselage wheel bay, but not for the nose wheel bay.

There is no indication in the instructions as to if nose weight is required. I decided to be “better safe than sorry” and I added a small lead sinker ahead of the cockpit. The cockpit itself has nice raised detail and a photo-etch heads up display. There are no seatbelts but I’m sure the aftermarket companies will take care of that and likely providing a full aftermarket cockpit, if you like.

Assembly of the wings is simple. Note that due to the option of having the wing tips folded you have two different wing slat options. Even though I choose to have the wing-tips in the down position, I ended up having a better fit by using the wing slats for the folded-up position (modified to the down configuration) rather than using the single piece wing slat for the down configuration.

While adding the wings to the fuselage I’ve found a gap in wing-root for the lower surfaces. I don’t really know where the problem was, so I just filled and sanded the area. I’d rather have a gap in the in the lower surfaces as it is not as obvious as on the upper surfaces. Speaking of the upper surfaces, they get a nice PE part with multiple perforated holes. The ailerons and flaps are separate parts -they can be posed if you like- and the fit is nothing less than outstanding.

The tail horizontal surfaces are attached to the rudder via some photoetch parts. I did not like that approach that much. The attachment points were weak and I was worried all the time that they will break off (they didn’t). Next time I will scratch-build a part, using the PE as a template, and the part will be made of very thin plastic. I think the overall assembly it will be sturdier.

I choose to model my Etendard with the belly air brakes in the closed position. Be aware that they are designed to be in the open position. Some sanding was needed to get them to fit flush against the fuselage.

I choose to have the Exocet missile in the right wing and one of the large fuel tanks on the left wing, plus the fuselage extra tank in the fuselage. The fit of pylons to the wings is excellent. By the way, the model did not have indication of where the fuselage tank is located. I looked up pictures and found it is just ahead of the landing gear bay. I drilled the holes where I estimated it should be placed.

Painting of the model was accomplished with Model Master Enamels. I pre-shade and post-shade the colors, as to add a bit more of “volume” to the model. Please note that the upper surface colors wrap-around the leading edge of the wings, plus the lower wing root of the wings too.

Decals –printed by Cartograf- performed flawlessly on top of a coat of Future. The anchor markings were a bit difficult to position, as the anchor arms attempted to fold onto themselves. Please note: all the numbers in the decals are individual digits. That allows for making any of the many different airframes, but it also means you have to align and set the space between all the digits.

After another coat of Future, I applied an acrylic wash to bring up all the nice surface detail and I was ready for the final steps of adding the landing gear and ordinance.

The landing gear nose is superbly detailed and engineered. It pretty much “snaps” into place and has the right angle to provide the correct “nose up” stance to the Super Etendard (It is a French-designed airplane after all…..). The main landing gear surprised me by lacking some alignment positions. I think they were molded without them.

With the landing gear in place and the ordinance in place I applied a satin coat to the overall model and I very proudly added it to my display case.

In summary: This model has good fit overall, with a few warnings for the lower wing roots and wing slats. The landing gear struts needed a bit of work to get them to attach to the hydraulic arms. On the plus side the surface detail is exquisite and the decals were superb.

I will highly recommend this kit to any modeler with a few kits under the belt and a bit of experience overcoming minor issues. Perhaps the best way to describe my experience with this kit is that I enjoyed so much –despite the few issues I’ve found- that I bought a second one.

I would like to thank Lucky Model and IPMS/USA for the review sample.