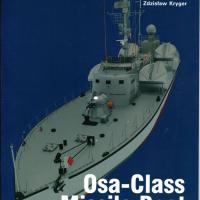 I would like to thank Kagero for this review sample

This book on the OSA-Class is the latest in their series of super drawings books. The OSA (“Wasp” in Russian) was developed in the 1960s for a role much like the USN PT boats. The OSA’s torpedo boat predecessor was the Shersen, which in many ways was an enlarged PT boat in configuration and hull design. The OSA introduced the P-15 Termit (NATO designated SS-N-2 Styx) anti-ship missile, replacing the old surface launch torpedoes. The OSA was built in large numbers and exported to many Soviet client states including China. The design is very reliable and long lived; it is still in service in some countries. The drew blood in the Indo-Pakistan war of 1971 when Indian OSAs sank or damaged numerous Pakistani warships. The OSA I was the first of the series with smooth-sided box launchers and the P-15 missile which had fixed wings. The OSA II introduced ribbed missile tubes with the P-21, folding wings Styx missiles. The missile tubes looked like ribbed condoms and so that term was used as memory aid to distinguish the two vessels! While OSAs were generally built to standard design, many differed in minor details due to needs of the receiving nation or modifications made later.

If you never have seen one of these Super Drawings books before, they use CAD 3D modeling to replicate famous ships and the “drawings” are views 3D model of the ship from differing angles, including close up details. Like physical models, virtual 3D models are only as good as the information available on the ship represented. This book captures the design of the OSA I, which was in service with the Polish Navy into the 2000s; one has been kept as a museum. No doubt Kagero had access to the real thing. I have photos taken around 2002 – 2003 by Polish naval officers who I worked with back them. This book compares favorably to those photos and ones available on the internet. In addition Kagero provides traditional plan, overhead, front and rear view drawings.

The book is a bit deceiving because while the title is OSA Class, it in fact reflects a late-model OSA I in service with Polish Navy as part of Warsaw Pact and then NATO. You can tell by the square upper deck house supporting the Muff Cob radar on the aft deck house (used to control the AK-230 gun mounts mounted on the bow and stern for air defense). Also the later boats received the manually operated mount for the man portable air defense (MANPAD) Strela infra-red missile (essentially a Stinger missile). If you have the Merit kit of the “Russian Navy” OSA I, which is in reality a late model Polish OSA I (without any Polish markings), this book is the perfect companion.

The 3D-drawings really capture the lines and machinery of the later OSA Is. The book has 65 pages of terrific drawings of every aspect of the ship. The detailed views of the open bridge and the rear deck are invaluable. The detail of the mast is also exceptional. Plus there are the standard drawings which are also a valuable modeling aid. Where I thought the 3D model fell short is a lack of detail in the missile boxes which have internal bracing a rails for the missile; the drawing is hollow. Fortunately Merit detailed this area. Also there is no detail inside the pilot house. For a vessel in 1/72 this is an area of the boat which could be detailed. Having access to the real boat, it would have been easy for Kagero to add that detail in scrap views. My other criticism is that the book does not address the configuration of the earlier boats as built. There was no Strela mount or deck extension to support it. Also the Muff Cob was atop a conical tower – a configuration I find more attractive. Many of the Squadron Publishing books do that well, showing configuration changes between variant. Alas. All that said, this is a well done book of an important Cold War vessel.

Kagero continues the Super 3D series and I applaud them for straying from the their typical large vessel book to offer a book of a smaller ship which was a vital part of many small navies. Highly recommended.