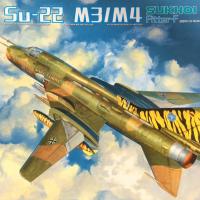 Developed from the delta wing Su-7 the Su-17/22 NATO code name "Fitter", the design incorporated a swing wing to reduce landing speeds. Interestingly the swing-wing was limited to the outboard portion of the wing allowing the landing gear and fixed weapon pylons to remain unchanged. Kitty Hawk has given us the Su-22 M3/4 in this boxing. The Su-22 is the export version of the SU-17 and you get no less than seven marking options for German (pre and post-cold war), IRAQ, Czech, Polish, Syria and Vietnamese aircraft. Perhaps the most memorable moment involving this aircraft is the encounter two Libyan Fitters had with US F-14s on August 19, 1981, in during which the Tomcats prevailed. Although it's not the most elegant of designs its always been my favorite cold war era Russian jet.

First impressions are important and Kitty Hawk knows how to make a good one. The large top open box comes complete with a dramatic color painting and side views of every version in the box. It gets better when you open the box. There is a lot of plastic in there and its production is top notch. The beautiful surface detail that equals any of the best out there. Four of the nine sprues are dedicated to weapons making it possible to arm your Fitter in any configuration you desire. A small photoetch fret contains seat harnesses, weapon mount flanges and mounting flanges for the flare/chaff dispensers. Clear parts are very clear with well-defined framing. Three decal sheets are included, two for the aircraft and one for weapons. Rounding out the package is a 34-page instruction booklet that includes full color, four view drawings of each version and all the weapon options included. Color callouts are for Mr. Color paints. As far as options designed into this kit there are a lot of them. There is a complete engine, openable speed brakes, cannons in wing cannon bays, separate control surfaces and intake by-pass doors.

As is customary with aircraft kits this one begins with the cockpit. A very nice K36 ejection seat results from the multitude of parts provided and finished with a PE seat harness I found I bit perplexing. The cockpit tub is build up from separate parts. Decals are provided for the instrument panel and side consoles. They reacted well to the setting solution and settled right into the raised details. A nice multipart HUD fits into the instrument panel shroud.

Next up is a full engine that with the exception of the augmenter will not be seen once the fuselage is closed up. This is one place Kitty Hawk didn't get it right. The tailpipe should not be flush with the end of the fuselage as indicated in the instructions. It is recessed on the real thing. I didn't catch that before it was too late. There are a lot of reference photos online so check them if you what to correct it.

A few other assemblies including the speed brake bays, nose gear bay, and the intake cone go in before the fuselage is closed up. I added a ball bearing for weight into the intake nose cone to make sure I wouldn't have a tail sitter. Here you find what could be an issue for some. The intake cone mounts into the sides of the nose and there are locator tabs to align the fuselage halves that are visible from the front. The first issue would be hard to fix, the second not so much. You will find the parts are very thin so the mating surfaces have little to hold on to. It didn't prove to be an issue during the build.

The nose gear bay includes very delicate actuators that protrude from the bay. Although they are very nice, I managed to break two of the four off during subsequent construction so beware. As for the fuselage, each side is divided into three sections and Kitty Hawk has you join the section halves separately and then join the completed three sections together. I ended up with a step between the rear two sections. I would recommend assembling all three parts of each half first and then joining the halves. The dorsal spine is made up of several sections. Make sure you install part A1 from the inside into A4 as the instructions don't call it out. Another minor gripe was the system of slots and tabs that the spine parts are supposed to fit into. I found it easier to shave the tabs off to get those parts to fit. That left some filler work cause the tab holes are slightly oversize. Not a big deal just seemed a bit strange given the quality engineering elsewhere in the kit. There are lots of protrusions on the Su-22 fuselage and Kitty Hawk has them all here.

The wings are up next and are complete with fully boxed out gear bays. Cannon bays with hollow end cannons are included. The swing-wing fits snuggly on a peg. I wanted to show my wings opened with dropped flaps so I left off the control surfaces to facilitate painting. The instructions would have you fully assemble the wings with gear and control surfaces but I elected not to until the painting was done. I was really impressed with the quality of the very prominent wing fences. They are scale thin and well detailed. I preassembled the landing gear and found them very well done especially the main gear legs which duplicate a very complicated arrangement with multiple parts that literally snap into place. I also assembled the weapons and fuel tanks in preparation for paint.

I chose the East German Su-22M4 Yellow 546 of JBG-77 as seen in 1988. Since there are no vendors nearby that carry Mr. Color paints I used Vallejo Model Air paints. I first used these paints in my last review (Eduard Bf-109F-4) and continue to be thoroughly impressed by the ease of use and quality of the finish. The underside is RLM 65 and the top side RLM 71, Camouflage Beige and Tamiya X-9 Brown. The yellow details are RLM 04. The bare metal sections are Alclad Dark Aluminum. The decals turned out to work superbly. They came off the sheet easily and laid into the details well. I used Solvaset to help the process. That was followed up with a coat of Alclad Gloss Klear Kote and a dark wash to bring out the panel lines. That was all sealed with a mist of Alclad Klear Kote Flat.

If you like ordnance hanging off your Russian jets, this kit will not disappoint. Every bomb, rocket pod, missile, ECM and recon pod you could want is provided. Given the limited number of mounting points, you'll have plenty for the spares box. I chose 500lb bombs, rocket pods, and some fuel tanks. The canopy and windscreen fit excellently. The last highlight of this kit is the incredible probes Kitty Hawk has done. They really capture the complexity and scale size. Very impressive.

Be prepared to spend some time on this one if you want to do it justice. I don't say that in a bad way. My initial impression didn’t change though-out the build. This is my first Kitty Hawk build and certainly, won't be my last. You get a full package to produce a very fine model without the need for aftermarket goodies. Areas that gave me trouble included the PE seat harnesses, gaps on the dorsal hump. And the step in the fuselage joint just ahead of the speed brake area. All of these were overcome with a minimum of hassle. I now have what I consider to be the new standard for this aircraft in 1/48 scale on my shelf. Thank you to IPMS for sending this one my way and to Kitty Hawk models for producing such a pleasurable kit.