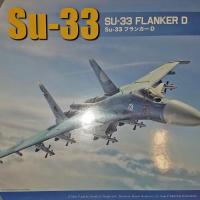 The Su-33 Flanker-D is the carrier based twin-engine air superiority fighter derived from the Su-27. It was first used back in 1995 and officially entered service in 1998. However with the break up of the Soviet Union only 24 of this aircraft were produced. In comparison to the Su-27, the Su-33 has a strengthened undercarriage and structure, folding wings and stabilizers, better engines and of course the wings are larger to increase lift.

There are over 320 parts in this kit with some not being used. There are 21 total sprues and there are photo etch pieces as well. As this was my first kinetic model I wasn’t entirely sure what to expect as I had heard a few rumors. I can honestly say I was disappointed by the overall instructions of the kit but amazed at the detail of the kit. I have not been a modeler for long but this is one of the best detailed kits I’ve ever seen. The armament was all molded as a single piece which makes it really nice to put together. However, I do really enjoy building models out of the box and with this one it was difficult to do with so many pieces being labeled incorrectly or not being labeled at all. Not to mention sometimes too much detail can be a bad thing and this was the case for the intakes. I did not get them to sit flush with the fuselage because of the immense detail that was inside the intakes. Another issue with this kit is it does a poor job at calling out what paint to use where. This kit was a difficult challenge but a fun challenge. Now, to the review!

The first step is assembling the cockpit, no surprises here this was pretty straight forward and the detail in the cockpit was incredible! Next is the ejection seat which is very detailed and went together really well. The following step was putting the seat into the cockpit and assembling the foot pedals

Next is assembling the wheel wells for the landing gear, all of which have very good detail. As a small hint, I would highly recommend fitting them exactly right or you will have fit issues later on as I did. Next are some landing gear doors, which to be honest I didn’t put on until later. However there is one part that goes over the landing gear area that you need to have on in order to do the intakes. The next step is the intakes and this is where I started to have some serious fit issues. It’s nice when they put a lot of detail into intakes, especially the compressor blades but when they’re rather bulky it becomes difficult to fit the fuselage portion around it. Which is the issue I ran into, instead of fixing it though I just kept building. This is also the point you need to cut out some holes for the pylons later on in the build.

Another thing I noticed, as with the next step is that they would have random operations by them self. For instance step 8 is putting a piece of gear bay in after you attach the intakes, not sure why they had a separate step for this. The next piece is the fuselage portion (or outside portion) of the intakes. Use some photo-etch here that was really nice but hard to paint after you’ve put it on. Again I had fit issues with this because the compressor blade parts they gave me were too thick and these pieces didn’t end up sitting flush to the plane.

Next are a few more pieces to fit onto the fuselage nothing too exciting. Following that is the front landing gear, this was a little tricky. Some pieces don’t clearly explain where things need to be or call out the right number that you should be looking for. When it came down to it I had a lot of photo-etch left over because they didn’t clearly define where I was supposed to use it but again, amazing detail. The next two items are the main landing gear pieces, again too much detail some wrong call outs and some very confusing call outs. But like the nose gear, extremely detailed and nice looking.

Remember the holes you cut out? Now it’s time to put the pylons on for the armament. This step also includes putting on the arresting hook. This is followed up by putting the rest of the landing gear bay doors on. Next is my favorite part of kits, the afterburners. Some really nice but delicate photo-etch pieces go into the exhaust to act as the afterburner. I tried to paint it was described in the manual but to me they just didn’t look real enough. Next are a few more pieces to place into the cockpit to give it more detail followed by putting the two halves of the fuselage together. Here is where I started to run into bigger fit issues, due to the cockpit sit and misalignment that I had the canard areas didn’t align properly and therefore had big issues with those areas after it had dried, I had to use a decent amount of putty to fill the gap. Next is putting finishing touches around the cockpit, followed by the canopy. Again all very detailed and in fact I had issues with the canopy because there was so much detail and I like to place mine in the closed position, I had to shave off some area to get it to sit.

I put my wings down as opposed to folded because I like to see how the plane looks as if it were taking off. I also laid the air break down flat (which is the next step) along with a few pitot tubes. The wings flaps were next and again, a lot of great detail and the capability to place them in any postion. I placed my flaps in the down position. Then came the vertical stabilizers which were relatively simple and easy to put together as well and fit very well into their slots. The nose cone calls out 4 pieces that attached to the nose cone at this point but I couldn’t find what parts they were talking about or how they installed, so I skipped attaching the parts. The outer wing and pylons require you to cut out some more holes and place the flaps how you’d like.

Finish the model by putting the wings on, the horizontal stabilizers, and the canards. The final build step is the armament. Like I stated earlier the armament is molded out of one piece so they are very nice. The only weapon which requires any assembly is the R-27 and it requires attaching photo-etch to it.

The painting for me was a challenge, I’m relatively new at the airbrush game and have yet to airbrush a plane with a camouflage like surface, so I learned a lot. This is also the first time I used Mr. color paints and I am in love with them. The finish looked very good and I can’t imagine doing a Russian subject with any other brand because of how well the paints worked. The decals were also went down extremely nice and I had only a minor issue with them. One star fold up on me and that was my own fault. Other than that the decals were very easy to work with. There are just A LOT of them.

Overall this kit was a challenge for me. I’m sure for someone with more experience, and a work ethic to go after the photos online or in books it would be a lot easier. I hope kinetic can get it together with the instructions. They were extremely confusing and very hard to follow at some points. The resolution of the images from the instructions was poor at best and you could barely tell what part went where sometimes. The positives this kit though are how much detail was put into the parts, and there are very few things you would need to buy for anything aftermarket related in my opinion. Everything was very nicely made. A few parts could have better tolerances but for the most part the pieces fit together really well.

Thanks to Lucky Model and IPMS/USA for providing this copy and the opportunity to take a look at their model of this nicely designed kit.