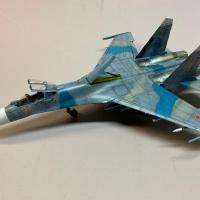 Refer to Part One for the assembly review.

I decided to make this a two-part due to the number of images and extensive text required to document the basic assembly phase. Although the assembly was a bit of a challenge for this model, the semi-finished model revealed a lot of nice surface detail that was appealing to me. This detail had some merit for an effort on my part to achieve a proper paint job and weathering application. If those efforts resulted in a nice-looking model the challenges faced during the assembly would make the effort worth-while.

The instructions do note the colors required in some of the steps, with FS numbers sometimes noted, while I was unfamiliar with the exterior colors called out (no manufacturer was identified). I decided to use Vallejo Model Air Colors for the model. The Vallejo paints were thinned with Vallejo 71.261 thinner at a ratio of one-part paint and one part thinner.

The cockpit was first primed with Tamiya white fine primer. After that had cured for 24 hours, I used a Tamiya mix to create the Air Superiority Blue called on the instructions. Details were brush painted with Vallejo Model Color paints.

I decided to paint the completed model as "Blue 74". Earlier I traced the outlines of the plan form, the horizontal and vertical stabilizers onto tracing paper to prepare the camouflage masks. Using the color information on the fold-out pages I drew out the camouflage pattern freehand, labeling each color to avoid confusion during the painting process. I like to use paper masks for some camouflage schemes as it allows a soft edge demarcation between the various colors. Each mask would be placed on the model using narrow loops of Tamiya masking tape sticky side out.

First the model's exterior surface was washed in warm water with a touch of Dawn detergent to remove any soil and allowed to dry. The exterior surfaces of the model was primed with Alclad Black Polyfill Primer. This provided a satin, smooth and hard finish for the final colors. I allowed the primer to dry for 48 hours.

The exhaust nozzles (left loose for the time-being), afterburners and engine interiors, and the aft fuselage metal surfaces were painted with various Alclad metallic paints. The exterior metallic finishes were then protected with applications of Tamiya clear blue and clear orange which also depicted heat discoloration. This was allowed to cure for another 48 hours before the masking was applied. The cannon blast panels and chaff dispensers were also painted with Alclad and masked.

The underside was painted with "Underside Blue faded", 71.332. The paint was applied in a squiggly pattern until most of the black primer was covered. This took three application to get what I was after. Once the paint had been applied the surface detail and engraved panel lines became more evident. Kittyhawk did a really nice job in this effort.

The top colors used were "Flanker Light Grey", 71.335, "Light Sea Blue", 71.089, and "Underside Blue faded", 71.332. First, I placed the appropriate stencil onto the model and drew the outline with a soft graphite pencil. When applying the paint, I planned to over spray the pencil line to limit the risk of having the black primer show though on the color demarcation line. This would prove to be very time-consuming. I started with Underside Blue Faded, and after each area was painted, I set the model aside to allow the paint to thoroughly cure before moving on to the next color. This procedure progressed until the entire surface was covered with masks and painting. The inside surfaces of the vertical stabilizers were especially challenging to paint, but it got done.

When the painting was complete, I carefully removed the masks from the model. Although time-consuming as noted above, I was pleased with the resultant camouflage scheme. Some touch-up of the paint was required.

The instructions call for the landing gear to be painted Medium Sea Grey FS318C/637. I used Tamiya XF-24 lightened 10% with Tamiya XF-2 Flat White. The paint-to-thinner ratio was 3:7. The gear was sealed with Future and a panel line wash was applied. Again, nice detail on the landing gear.

Wheel hubs were painted with Vallejo Model Color Russian Green, 70.894, while the tire was painted with Panzer Aces Dark Rubber, 306.

The interior surfaces of the gear door were first primed with Tamiya Fine White primer, then with AKAN 73058 Red.

The missiles were primed with Alclad black primer, and then several coats of Tamiya Fine White Primer were applied. A clear gloss coat was applied and a blue-black pin wash was applied around surface details. The missiles were sealed with Model Master satin. The pylons were painted with Medium Sea Grey separate from the model, fixed to the finished missiles, then fitted to the model.

Once the painted had been completed the model was given three thin application of Future in preparation for decals and panel line wash and allowed to cure for 48 hours. If the modeler in inclined to highlight panel lines and rivets with a wash plan on spending several hours to complete this task. Kittyhawk has done a commendable job in replicating panel lines and rivets, and a neutral brown wash served to nicely emphasis these details.

The three decal sheets are packaged in a small zip-lock bag, and each sheet is protected by a clear glossy film that is removable. Stencils locations are shown on sheets 11 and 22. Each stencil location has a number to facilitate placement. There are easily over 200 individual stencils for this model. The first decal to be applied was the instrument panel. Because the plastic part includes raised detail I thought it best to cut the decal apart to accommodate the detail. I used warm water to release the decals from the backer sheet and placed them on the panel face, using a Q-tip to press the decal into place. I then applied a bit of MicroSol to encourage the proper amount of settlement onto the surface detail. At this point the decals should be left alone.

Kit decals are always an unknown quality to me, and I always start with the underside of the model to determine how they will perform on exterior surfaces. After dipping each decal in tap water, they were placed on a wet sponge until they had loosened from the backer sheet, which took less than a minute. I used MicroSet to place the decals, a Q-tip to squeegee the water out from under the decals. MicroSol was used to get the decals to conform to surface details. The decals responded well to these products. There is very little film to the decals, and it appeared not to be overly thick. It took me 45 minutes to an hour to apply the decals to the undersides. This was a good indicator of how much time would be required to apply all the decals.

I spent about five hours applying the decals. Once completed to used a piece of soft cotton dampened with warm water to wipe down the surface of the model to remove any surplus decal setting solution. Once dry I applied a clear satin finish to the model to seal the decals and unify the surface.

Bringing it All Together

There is a lot of plastic in this kit, and it is a big model. Some sprue attachment points require creative removal methods to assure fit of parts later, and the raised ejector pin stubs can be annoying. Good references should be considered as the instructions are sometime vague regarding placement of parts and colors are sometimes not correct. The detail, rivets and finely scribed panel lines are superb. The plastic seemed a bit soft but caused no issues during parts removal from the sprues or cleanup.

The use of the very tiny PE parts for antenna and so on would, in my opinion, be better served with injected plastic set in shallow recesses that can be painted separately and fixed in place upon completion of the major work. I find the PE parts difficult to handle and fix in place, and inevitably they get lost or knocked off.

The difficult fit of the top and bottom halves horizontal join at the front fuselage requires a good deal of attention and dry-fitting to obtain a good fit if that is at all possible. The greatest challenge with this particular assembly is the size of the joint between the two main parts that must be fitted together. Some of the areas snap together, while other must be slid in place. Overall, this was the most difficult part of the assembly. The fit of the front cannot be determined until everything comes together from the rear forward, and if the parts do not fit everything must be disassembled, the adjustments made and obstructions when found eliminated, then the process is started over. Many blind corners up front make it difficult to identify parts conflicts. Solvent should not be applied until everything fits perfectly.

The missing axels on the main landing gear?? This can be corrected, but should not have occurred. Shame.

It would have been nice if a full complement of missiles had been included in this kit.

The very fine static dischargers on the trailing edges of the wings and horizontal and vertical stabilizers are a nice touch, however they are very delicate and require care to avoid damage during the build and painting process.

Granted some of the issues encountered may have been my own doing, but I was able to overcome those challenges too. Assembly and painting took a lot more time and effort than I had anticipated.

For the most part this is a somewhat improved product from Kittyhawk, but still requires the builder to be attentive. There remains some engineering and manufacturing issues with the fit and molding of some parts, but nothing that would deter anyone from finishing the build, and being happy with the end result. The rather large gap on the underside between the rear engines and the fuselage is an unforgivable error in my opinion. the error in the main gear well molding is also something that should not have occurred.

The cost of the kit and the problems with the various molded parts may be a deterrent to many modelers. Beware: this kit will certainly test your modeling skills, abilities and patience. although getting through some of the assembly steps caused me some concern, I was pleased with the end result. However, I did have to work to get there. I am happy to add this model to my collection of modern Russian aircraft despite the effort it took to finish. Overall, this was a fun but often challenging build. I would recommend this kit to anyone who is interested in modern Russian aircraft and who is willing to put in the extra effort.

I wish to thank Kittyhawk and IPMS USA for the opportunity to build and review this kit.