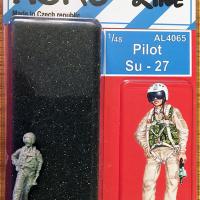 I’ve always liked modern Russian/Soviet aircraft and have several in the works (Su-27, MiG-31, MiG-21). Seeing the opportunity to review this pilot figure sounded like a prime chance to add a little spice to one of them (whenever I get them finished!). Though this particular figure is listed as a Su-27 pilot, my research showed that the uniform and gear is applicable to pilots of most other modern Russian fighter and attack aircraft.

No assembly at all is required on this guy, just a little cleanup, priming, and painting. The cleanup was minimal, with just a few bits of stray resin and what looked like a couple of seam lines along the legs. Just a few minutes with a sharp scalpel blade and a fine grit sanding stick was all that it took to get the figure ready for scrubbing and priming. I usually use Dawn dishwashing soap, hot water, and a toothbrush to clean up and left over mold release agents. That worked well and, after drying for 24 hours, the figure was sprayed with Tamiya Fine primer. Another 24 hour drying time for the primer and it was ready for paint.

After looking at many photos of modern Russian pilots, plus the included colored pilot illustration, I tried several types of Tan in an attempt to match the base uniform color. I ultimately settled on a Tank color from the Ammo of Mig line: Panzer interior Cremeweiss (A.Mig-017). All other tans that I tried looked good wet, but dried too dark. I sprayed the paint using Tamiya lacquer thinner (yellow cap bottle) and it covered very nicely. Once the base coat dried, the details of the figure pop out quite nicely, though some are a little exaggerated (the parachute harness straps would be several inches thick), this also makes the painting a little easier. For the harnesses, I used Model Master Aircraft Gray. Tamiya white for the helmet. Tamiya NATO black (was that inappropriate?) for the boots and helmet trim (a little gray dry brushing was done on the boots). On the survival vest, I turned to more Mig Ammo acrylics, this time from the Modern Russian Colors set, using the Green Khaki, the Light Green Khaki and, from the German Interiors set Rotbraun to create one of the camouflage schemes that I found during research. I did the metal buckles in aluminum but noticed that after the flat coat, it’s difficult to tell that there’s any metallic color on them. I’ll go back over them with something like Chrome Silver.

The pilot's visor (molded in the down position) got a coat of Tamiya Nato black and them some Crystal Smoke (again from Ammo of Mig) to give it a high gloss. The pilot's face was done in Model Master Flesh (looks pretty pale, but after a long Russian winter, I figured his tan would have faded). Prior to a flat coat, I used several oil colors as washes to highlight the details and add some depth (out of practice doing this on figures). When all had dried, I lightly masked off the head and sprayed a mixture of Tamiya Flat Base and Future as a final coat. This took care of the various glossy spots nicely.

Considering the last time I painted a figure was more than 5 years ago, I’m pleased with the results (I was never real adept at it even then). With the pilots face mostly hidden by the visor, not too much work is required on the flesh tones. Most of the details are prominent and sharp enough to paint fairly easily and stand out nicely. I think this pilot will add nicely to any modern Russian aircraft which it’s placed next to or even as a standalone. Now that I’ve seen the quality of the Plus Models figure up close, I’m off to search for their X-15 pilot!

A big “Thanks” to Plus Models and IPMS USA for the opportunity to review this kit.