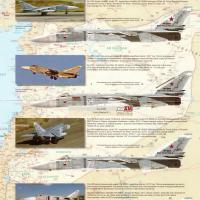 The Sukhoi Su-24 “Fencer” has been in service for the Russian air forces for over 40 years. It is a rugged, variable wing sweep bomber that is easy to fly and well-liked by the two-man crew. Several kits have been produced of this aircraft and recently, the Advanced Modeling company has released some decal sets that depict the Fencer in modern markings.

This decal package contains an Information Sheet, a decal sheet, and a set of paint masks. The Information Sheet is in both Russian and English. The English translation is easy to understand and is very informative. and not at all difficult to understand. For all of these markings, a color profile and a color photograph of the subject airplane is included. This allows the modeler to figure out the placement of these decals. No plan view drawing is provided but the gray and white scheme is the standard one for the Su-24. Kit decals are required for the various warning markings on the airplane.

Currently, these decal sheets are available from Victory Models in the US and Victory Models is very easy to deal with. The Advanced Modeling web site is only in Russian at this time.

These decals are well printed and easy to use. In all cases, the main white ID numbers are accurate replication of the originals. The 8 in 78 features a fine red surround to the number while numbers 79, 83 and the 7 in 78 have fine lines in the numbers reflecting use of stencils.

I received four sets of these decals to review. I built an Su-24 to test and to display one set of the decals. I chose white 83 because it had the large stained area on the fin and I could check out the paint masks. I sprayed a lighter gray color on the rudder and the top of the wings and applied the masks. After spraying the gray and white colors, I removed the masks and they did a great job of sealing the paint. I wish that Advanced Modeling had provided some information on where to use the masks. Large and small 04 masks are supplied, and I assume that they would be useful in building White 79. It also appears that the masks feature several small rectangles. I have no idea where these would be used.

Regarding the decals, they lay down smooth and follow the surface. They can be moved around readily but are very thin. The decals are strong enough with withstand some significant "handling" but thin enough to allow molded detail to be seen. Photos of my model are attached.

This decal set is highly recommended for several reasons. The Information sheet is thorough in its coverage of the aircraft which "wore" the markings on the sheet. The illustrations are clear and will be of great assistance when getting the placement of the decals correct. The price is reasonable. Thanks to Advanced Decals for making this decal sheet available and to IPMS for letting me review this interesting sheet.

While preparing for this write-up, I checked out Google Earth to figure out the location of the Khmeimim Air Base. I was able to find the base near the northwest edge of Syria close to the Mediterranean. Zooming in on the air base, I saw lots of aircraft. There were several Su-24s parked alongside the main runway and also, something that looked like the Su-34. Technology is great!