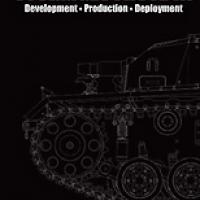 This is the first of a two-volume set detailing the history, tactical development, and use of the various marks of the Sturmgeschutz III, commonly referred to as the StuG III. Volume 1 is predominately text. Volume 2 is mostly photographic in content.

This book offers a wealth of data for modelers, as well as those more interested in the technical aspects of this weapons system. Chapters include: background, technical development, series production, design variants A thru G, the factories involved in production, and combat records and troop reports.

There is a full developmental section, where the evolution of tactics is examined. Due to the requirements of the conflict, a weapon developed to support the infantry with mobile heavy firepower, evolved into a premier tank killer and improvised tank replacement. A howitzer-armed version, the Sturmhaubitze, was introduced to remedy this, with limited success mostly due to the limited numbers produced.

All the major production companies are listed, with their full and abbreviated names, and in many cases, their addresses. Subcontractors are also listed, with the items they produced. Production figures are provided for each variant, as well as the date range of each.

Ample text and photographs show the effects of the Allied bombing campaigns against German industry, and the resulting shortages of vehicles and parts. Added to this, Hitler’s interference in the technical development of the StuG system often further tangled production.

All the different types of ammunition used are described and illustrated, including the markings on the base plates. The various howitzer rounds are treated in similar fashion.

Modelers may prefer the photo volume for reference, but I thoroughly enjoyed reading this book, especially for the insights it provides regarding troop use. Highly recommended.

Thanks go to Casemate Publishing for providing this book for review.