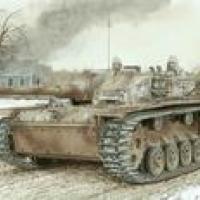 The Sturmgeschutz III (Stug III) assault gun was the most produced armored vehicle by Germany in WWII. It was built on the Panzer III chassis, initially to provide infantry support but continually modified and improved growing into a very effective tank destroyer.

The Stug III F/8 was produced Sept. - Dec. 1942 with 250 being built. It introduced an improved hull similar to the Panzer III Ausf. J/L with additional armor of 30mm thickness bolted on to speed up production. It mounted the 7.5cm Stuk 40 L/48 gun that would become the standard gun carried throughout the G series.

This is one of Dragon’s “Smart Kits”. It contains over 800 light grey parts, photo etch, metal wire, and the Magic Track type individual track links. Many of the parts are slide molded and over all detail and appearance are excellent!

The instructions are the typical fold out type from Dragon in which we normally see color callouts in Aqueous Hobby Color, Mr. Color, and Model Master numbers. There are 17 assembly steps and a painting and marking guide for three vehicles (one in Norway and two in Russia, one panzer grey with white wash and one Dunkel Gelb with white wash). A small 2”x2” decal sheet is included.

Construction starts with the lower hull. Fit was excellent. In steps 1 and 2, I found that parts R6 and R5 needed to be swapped. I couldn’t find the parts Q38 because they are actually Q22. No other problems were encountered through the rest of the lower hull and fender build, steps 3 - 6.

Steps 7 – 12 build the upper hull sections. Again fit was excellent. I recommend leaving part R11 (hull roof) off until step 16 when all the major assemblies come together to allow you some wiggle room while wrestling the three major components together. Step 11 doesn’t give the hatch hinge deck mounted half part numbers when installing the engine hatches. These are part G40.

Steps 13 – 15 build the gun and fighting compartment. Fit was again excellent with no issues. I painted the interior radome tan overall with the various details picked out in their particular color and weathered with pastels. Note that the gun mantlet and barrel assembly are separate from the breech assembly until step 16/17.

Step 16 - 17 shows the lower hull, fenders, fighting compartment, forward upper, middle upper, engine deck, tracks, a couple other misc assemblies and barrel assembly magically flying together… Ain't gonna happen… The order I came up with is this… Install fenders (W2 and W3) and forward upper hull (D7) first. The part D7 helps hold the fenders in place. The fighting compartment (K) was installed next, with no problems. The upper middle hull (R21) gun barrel (N) and Q34 were next. Fit between the barrel and breech is tight so I had to do some sanding on the breech to make it easier. The center compartment roof (R11) was installed now. I had to sand the sight, on the left hand side of the gun breach, down on top to allow the roof to have enough clearance to seat all the way down as needed. The rear deck (W1) was installed next with no problem, it just clicks into place. The misc parts (tow cables, spare wheels, and track holder) were installed last. The “Winterketten” in this kit are the tracks which have an extension on the side to make them wider to allow better traction on snow and cleats that are installed on alternating tracks to provide grip on ice. The extensions are molded on as part of each track but you have to install the cleats to each of the tracks that you choose too. I chose every fourth track. This was the most tedious part of the build. They were assembled and formed around the road wheels/drive sprockets and then removed for painting.

The Stug was painted an overall Tamiya German Grey. A light white wash of Tamiya White was sprayed on next. The tracks were painted a base coat of Tamiya NATO black. The tracks were installed and touched up. All the detail painting was done next using various Tamiya and Model Master paints. National marking decals were applied. And then the Stug was weathered with several shades of pastels.

I enjoyed this build. I find the Stug III very interesting (one of my favorite WWII tanks). Fit was excellent overall. Detail is very good. You get a nicely detailed fighting compartment and the rest of the hatches are position able if you want to go further in your interior details. A couple of crew members and mine will be truly complete. There are the occasional misidentification of parts in the instructions and the fitting together of the major components at the end required some trial and error but they do fit together well once you figure out how… But those minor issues are far outweighed by how nice this kit really is. Much thanks to Dragon USA for this kit!!!