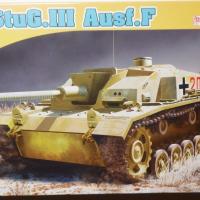 The Sturmgeschütz III (StuG. III) was Germany’s most widely produced armored fighting vehicle of WWII. By the end of the war, over 10,500 vehicles, in a number of different versions, had been produced. Built on the chassis of the Panzer III, and originally designed as an infantry support vehicle intended to knock out strong points and hardened defenses, it really proved itself as a tank destroyer first on the Eastern front in Russia. First in Russia, the StuG III Ausf. F was armed with the longer 7.5cm StuK 40 L/43 gun and became a formidable opponent on the battlefield.

Dragon latest offering of the StuG III features many newly tooled parts, including the upper hull, fighting compartment superstructure, engine deck, and sprocket/idler wheels. However, the really different part is that the road wheels and track runs are made as one piece using a vinyl material similar to Dragon’s DS tracks. These new tracks provide nicely detailed road wheels, return idlers, and partially detailed tracks. I say partially detailed, because the inside track pieces don’t show individual track links and are smooth. Even in 1/72 scale, this lack of detail is fairly obvious. The chassis hull is the only part in the kit that is not retooled.

The kit has a small part count with only 32 parts on one sprue. In typical Dragon fashion, even with only 32 parts, there are still five parts that aren’t used for this model. The details are nicely done, and the upper hull has all the pioneering equipment, and tools, molded onto the kit, except for the cleaning rod for the gun. The hatches are all molded closed, and it would take a considerable amount of work to cut them out and model them open, but no interior details are provided, so there’s no need to show them open. The gun is provided in one piece, but does has a small seam line around it which will need to be addressed. The one really noticeable thing on the gun is that the holes on the muzzle brake are not provided. There are indentations where they should go, and I suppose you could paint those parts black, but the muzzle brake on this gun was very obvious, and should be cut out on the model. I used a small drill and opened them on my kit without much effort.

With such a small part count, construction goes very quickly. Since the chassis is from a previous model, you’ll need to cut off the front tow hooks and replace them with the ones common to the Ausf. F model, a similar amount of surgery must be done to the rear of the chassis, so the appropriate exhaust can be added. The replacement parts matched up perfectly. Take care attaching the headlights, they are very tiny and don’t have much of an attachment point. Where the engine deck meets the back of the fighting compartment, there was a small gap. I attached a piece of evergreen on the inside of the tank to make this less obvious, and in the end, it’s just about invisible. You will want to dry fit part A16, the cleaning rod, as it fits nearly flush with the side of the fighting compartment, and would make attaching the appropriate decals virtually impossible if A16 is attached prior to applying the decal. Attaching the vinyl tracks was extremely simple, and I had no issues with fit, or alignment.

The kit includes markings for 2 very similar vehicles on the Eastern Front 1942, one in all over Dark yellow, and the other in Dark Yellow with some light Khaki Green camouflage. I choose to go with the first tank from Sturmgeschütz-Abteilung 201 in 1942. I primed the model with a light grey enamel paint I had left over from another project on the bench, and finished with Tamiya Dark Yellow. The paint adhered to the plastic and the vinyl tracks with no problems. I ended up adding some light track link details to the insides of the tracks using a pencil. The decals work very well, were all in register, and settled nicely with some mirco set/sol.

Overall, the kit is well-detailed, and easy to assemble. Due to the ease of assembly, and the relatively simple paint schemes, I would recommend this kit for any experience level.

My thanks to Dragon USA and IPMS/USA for this review kit.

I've got the kit. It's as simple as the old Monogram 72nd scale P-51B kit from decades ago.