A Storm of Spears - Understanding the Greek Hoplite at War 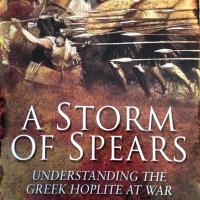 Have you ever struggled over a problem or edited your own writing, only to have someone look at it and see the thing that you couldn’t find or solve in seconds? That’s how I felt reading this book. The Greeks dominated the fourth and fifth century BC battlefields with the Phalanx form of warfare, which combined the use of specially armed and armored soldiers (or Hoplites) in specialized formations. As the title implies, the author has taken a fresh look at old evidence of ancient Greek writers and artists and coupled that with modern research, primarily in the form of re-enactors who put on the Panopy, (or armor) and the weapons – in this case, the thrusting spear of the Greek solders – and tests his theories of methods and tactics. In the process, some interesting and groundbreaking developments emerge that shed new light on just what the ancient writers meant and how much artistic license was used in creating the vase paintings we envision when we think of this period of history. This is a serious work of intellectual pursuit. Mr. Matthew generated the material in this book while working on his Masters thesis, and that’s the level of research reflected in this volume. Source writings are quoted in Greek, and it’s clear the author is familiar with its interpretation. Extensive notes and a bibliography round out this effort.

Building the case for his conclusions piece by piece, the author begins with the essential Hoplite weapon, the thrusting spear. Drawing primarily from ancient art, the author describes how the spear was made and, more importantly, how it was used. Here we find the first challenge to conventional theories. Artwork recording Hoplite warriors seemed to indicate the use of an overhead grip on a spear-like weapon. Matthew shows that in several of the pictures the weapon is actually a javelin as indicted by a small ring (or an Agkule) used to propel the javelin when thrown, and the absence of a balancing tip on the back end of the shaft called a Sauroter. The balancing weight on the back of the spear allowed the Hoplite to balance the weapon comfortably and project it beyond the shield he held in front of him. A series of tests using the aforementioned re-enactors concluded that the overhead method would quickly fatigue the Hoplite. The author actually proves the more efficient means of deploying the spear was from a low or underarm position. In fact, though field tests using replica weapons, he finds the best method for thrusting the spear is from these two positions.

Next, the Panopy or Hoplite armor, which included body armor and shield, is examined. The Aspis/Hoplon, or shield, is analyzed as to its shape and how it was held for battle. The body armor pieces are examined in detail and tests are conducted to determine the best thickness and shape combinations that provided the best protection. Then the Panopy and the spear are brought together and the body position of the individual Hoplite is considered. Factors such as stability of the Hoplite and ability to use the spear are run through a series of tests. Again, the results don’t quite match up to the artistic record. A stance of about 45 degrees with shield on the left shoulder yields the most protection and weapon range.

Finally, the formation of Hoplites with overlapping shields and projecting spears, better known as the Phalanxes or shield wall, is introduced and again investigated in detail. In fact, the title of the book is a quote from Sophocles who called this style of warfare “A Storm of Spears”. The author’s research questions several conventional thoughts in this area. First, the overlapping of shields on the man to the right appears to be the most workable formation in terms of mutual protection, ability to project the spear, and step into the rank to replace a fallen comrade. Perhaps the most interesting conclusion reached is that it would have been rare for the Greek armies to charge the enemy or to push forward by the rear ranks literally pushing those in front of them. Matthew’s research seems to indicate the most common approach to using the Greek tactics would be a slow march toward the enemy with cadence provided by some form the musical direction. This would conserve strength and allow maximum use of the Phalanxes’ advantages. While some running attacks are clearly indicated in ancient writings (Marathon, for example), it may have been a reference to reforming the ranks before an attack. The author suggests that the term push forward didn’t mean a push from behind. To do so severely limited the Hoplites movement of shield and spear and would endanger the ranks behind by exposing them to the rear tip of front rank’s spears. Instead, he suggests the term was more in line with the conventional meaning of pushing forward – general forward movement of a military force.

I was drawn to this book because my children attend a classical school. The classical model places a strong emphasis on the development of western civilization and culture, and thus spends a lot of time on Greek and Roman studies. As the official homework helper, I’ve been getting that education myself. While this is a college level work, it’s written in a way that the lay reader can clearly understand. If you think I’ve given away too much, read the book and you’ll see I have just scratched the surface.

In terms of its value to the modeling world, if Greek figures or warfare are your interest, you are sure to find some useful information in this book. There are color photos of the author in the Hoplite panoply. In fact, there are several formation photos showing a portion of what the phalanxes would look like. I learned a lot from this book and watching movies like 300 or looking at Greek warrior vase art will never be quite the same. Thank you so much Casemate Publishing for the sample and to IPMS for allowing me to add this to my collection and hopefully encourage some of you to do the same.