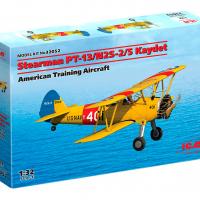 The Stearman PT-13 (Boeing model 75) “Kaydet” was a primary trainer used by the US Army Air force and the US Navy before and during WWII. The Stearman’s is a fabric covered, open cockpit biplane, powered by a radial engine and extremely rugged design which is ideal for a training aircraft. Introduced in 1934, the Stearman served as a trainer through the end of WWII. After the war, many surplus Stearman’s were sold on the civilian market and served in many roles like crop dusting and air shows. The PT-13 and PT-17 airframes are basically the same except for the engine where the PT-13 has a Lycoming R-680 radial (9 cylinder) and the PT-17 has a Continental R-670 radial (7 cylinder) engine. There are still a few Stearman aircraft flying today which you will see at local fly ins and air shows. Many of the aircraft owners will offer rides in their aircraft so if you get a chance, do not turn it down.

Packaged in a thick sturdy box that is separate than the cover (which is really nice), there are 5 sprues (4 gray plastic and one clear) containing nearly flash free parts, painting masks for the windscreens and a nice decal sheet that covers three different paint schemes & markings. The only area that had noticeable flash was on the engine sprue. There are some very fine parts that you need to take extreme care when removing them from the sprue. Parts for the cockpit frame are the items that need the most caution when removing them from the sprues.

The Instructions are 20 pages with painting & decal section in full color with the rest is black & red text. Ukrainian and English is used equally in the instructions. The steps and illustrations are very clear and well laid out however I did deviate a little. For rigging instructions, there are three illustrations that will assist you. One item missing in the rigging is describing the “wire stay” which will need to be scratch built along with the rigging wires. Paint tables refer to Revell and Tamiya paints. Check your colors carefully with reference photos for which there are plenty available online.

Starting off with the internal cockpit frame, the tubular frame has locating pins to help locate the sides and lower frame. I like the layout ICM has which allows you to fully assemble the cockpit including seats and install that after the fuselage is assembles & seams filled. There are a few areas I modified on the kit and most of these areas are in the cockpit. The first is bending the control sticks forward (molded in vertical position) which is where the stick sets when parked on the ground (elevator fully down). The other area is unique to my subject aircraft (modeling a friend’s PT-17 for which more updates will happen after this review is posted) is small box on the right side of the forward cockpit. This was removed and a custom one was created using CAD software and a 3D printer to create a panel containing VHF radios and headset connections. This was installed in the aft cockpit on the right side. A map case was printed and added behind the forward seat. Finally, aftermarket lap belts from Eduard were added along with surplus shoulder belts added. Wood grain decals were used on the floor beams and a small sheet plastic strip added for a wear plate below the rudder pedals. On step 3, the left and right rudder pedals are reversed so be aware of that. Color callouts are decent but always check online references for greater detail on where the colors are applied. The inner fuselage and frame work (stringers) colors are called out correctly but on my subject aircraft, there is a green section that is different from the instructions. There is also a small portion of the external wing color slightly visible on the floor which I painted yellow.

The fuselage major components are made up of four areas, fuselage sides, belly and upper cap. The lower portion and sides can be fully assembled and seams filled before installing the cap. One area I deviated in steps was adding the lower wing to the fuselage. I wanted to do this so the seams could be cleaned up on the floor before the cockpit internal structure is installed. A firewall should be added just forward of the cockpit tubular frame which ICM does not include. A simple piece of flat sheet styrene was cut, painted silver and installed. The upper fuselage (cap) assembly consists of instrument panels and upper seat area closeouts. There are decals for the instruments which I cut out using a punch set. Once the upper section is completed, it was installed onto the main fuselage. Moving to the landing gear, the strut covers can be installed without installing the struts & gear assembly which is recommended installing the landing gear at final assembly.

On to the wings and elevator components. ICM does not indicate this, but for rigging there are very small circular reliefs that are where rigging will need to be located. I drilled very small holes (at appropriate angles) at each location. These holes will be where rigging cables will be inserted. The instructions give a decent indication of rigging but refer to online reference photos to verify rigging. The large “rings” on the wings are access panels and match the fuselage color. On my subject aircraft, these rings on the elevator are actually clear plexiglass coverings where rigging goes into and joins at the elevator metal structure. Installing the upper wing was fairly simple however I did use tape to pull the upper wing tightly on the struts for a secure bond.

The engine is a little piece of art in itself. The only thing lacking is ignition wires and spark plugs. I drilled out where the spark plugs go and added round styrene rod for spark plugs. The two halves were assembled and flash was removed. These parts were the only items with any noticeable flash. Sanding sticks did a great job removing flash and any misalignment on these parts. I was worried when assembling the exhaust pipes to the collector ring but I was amazed how well it fit. While the glue was still setting on the exhaust, I placed the collector ring assembly on the engine to ensure each exhaust pipe will end up on the correct location on the cylinder. Behind the cylinders, the intake runners are on a single part and there were not any issues aligning to the cylinders. The engine and propeller (two options, fixed pitch & constant speed) was set aside for installation after painting.

There are three different paint schemes provided. One Navy, one USAAF and one not specified (silver scheme). My build is the US Navy “Yellow Peril” which I used model master Chrome yellow FS13538 was spot on to the real aircraft. For the red band, Tamiya X7 is also a perfect match. The blue on the tail was a challenge so I made a custom blend of mostly Tamiya Sky blue X14 and darkened very slightly. I needed change the large numbers on the fuselage side to match my subject aircraft. To accomplish this, I used a vinyl cutter to make vinyl masks. Painting the base color of white and black in the appropriate area, the masks were applied and remained on until the remaining model was painted. Having a gloss finish really helps with decals. The large roundels went on without any issues and snuggled down on the wings without any bubbles after an application of decal setting solution. Clear coat will be applied after final assembly.

Time for the challenge, rigging. The instructions give a general rigging guide however a little more information would be useful. One note that should be indicated is to drill out or point out the small rig point “dimples”. Another note would show the arrangement of the wire stays showing length and angles the wires pass through. Scratch building and drilling the wire stay was a challenge and if that was offered on the sprues, that would be very helpful. I am aware there is no easy way for a kit manufacturer to handle rigging and ICM did a good job with this kit.

For rigging wires, I used .010” (.25mm) diameter styrene rod compared to the aerodynamic shapes wired on the real aircraft. The wire stay was made from about .032” (.8mm) diameter styrene rod and drilling six small holes for the wires to pass through. Carefully measure the length for the wire stay, mine was cut to 1.2” (30mm). I made a sketch showing a what the wire stay should look like. When I drilled the holes in the wings & fuselage (before attaching the upper wing), the holes were drilled at an approximate angle to how the wires run. The real aircraft has fittings & turnbuckles but I did not add that detail. Not the best job but it is my first attempt to add rigging. On the elevator and tail, there are only 4 wires which are easy to add. I added push rods for the rudder control as well. In addition to rigging, I added metal fuel lines and pneumatic lines to a custom venturi tube. The kit offers a single venturi which is common to most Stearman’s I have seen. Since I am building to a specific Stearman, that aircraft has a dual venturi so I made a custom venturi in CAD and printed that part.

Final touches to add were the wheels which I used a new resin set from MH Design Scale Model studio who offer a diamond pattern tread compared to the smooth tread wheels in the kit. The set includes main wheels and the tail wheel and I highly recommend this set. MH Design also offers a numerous other PT-13 & PT-17 items. I needed to install the fixed pitch propeller so I needed to sharpen my skills on simulating wood for propellers. There are some great videos on how to do this so take the time to learn this technique. This is a skill I need to work on some more since I can see a need for improvement but this project looks convincing.

Overall, this is a top-notch kit and a very popular subject. The quality of this kit really shines compared to other Stearman kits produced in previous years. The areas that really stand out is the cockpit and engine detail which give this kit great depth of detail. Assembly is not difficult but there are areas to pay close attention to, primarily small fragile parts that take extreme care when removing from the sprue. It would be nice if ICM would to include a small photo etch set with seat belts but a few aftermarket companies already have seat belts available. Your greatest challenge will be adding all the rigging so prepare yourself if you take that route. I expect to see this kit at contests soon sweeping the awards. Take your time and brush up on scratch building and you will have a show stopper.

Many thanks to ICM plastic model kits for providing this kit to IPMS for review.