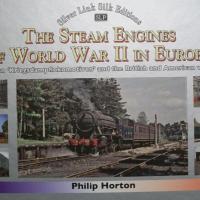 The book itself was a little bit on the small size (format) for my liking but the contents make up for this minor fault. The book also has a bookmark attached which is a nice feature.