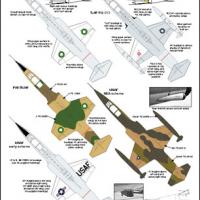 Iliad Decals is a firm based in Canada that produces decals for many subjects in both 1/48 and 1/72 scales. Printing is nicely done with all colors in register and true. They’re traditional water slide configuration, are thin and look good.

The sheet carries markings for seven F-104s. All aircraft depicted are combat aircraft.. There are a variety of schemes worn by these warriors, so there is a nice selection of colors and nationalities present. There are three USAF birds, two of which that were flown in the Southeast Asia scheme that were based at Udorn Thailand in 1966-67 during the Viet Nam war and escorted F-105s into action. The third one is a sleek looking bird in white over ADC gray that has an interesting back story, with the pilot being held as a POW in China for about 8 years!!

Foreign 104’s includes two Pakistani birds, one obtained from Jordan, One being victorious and the other going down in defeat. A Canadian built G model in Republic of China markings is an interesting inclusion, and finally a Turkish G model flown during the Greek Turkish Cyprus confrontation in 1974.

This is a very nice sheet with some wonderful markings not normally seen that will enhance any Starfighter collection, or fill a niche of some smaller air forces. A base kit isn’t listed that those marking fit, and with the nature of the markings it’s my guess they’ll fit any 1/48 scale 104 kit. The color drawings accurately show the paint schemes associated with these markings, and I can say the SEA schemes are correct. I highly recommend this sheet to anyone contemplating building a Starfighter, anyone interested in an unusual air force or small air force.

My thanks to Iliad Decals and IPMS/USA for proving this sample for review.