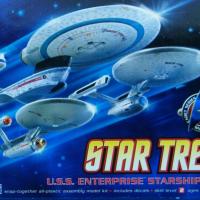 “1/2500 Scale – the final frontier. This is the kit review of the Starships “Enterprise.” Their 5-day mission: Amuse a 4-1/2 year-old little modeling nut, give his dad a chance to check out some new models of some old friends, and to boldly go where few built kits have gone before …(Wal-Mart, the public library, Lowes, Max & Erma’s, McDonalds, …anywhere little hands can carry them).”

It’s hard for some of us to believe it’s been nearly a half-century since Star Trek’s debut in 1964. Over the decades, the Starship U.S.S. Enterprise, NCC-1701, has arguably become the most recognizable, esteemed, and influential vessel in intergalactic travel -- so influential that even the first NASA Space Shuttle bore her name as the result of a massive write-in campaign from Star Trek fans in the mid-1970’s.

Her incarnations have been many, starting with the original “made for TV” Constitution-Class NCC-1701 in 1964, refitted in 1979 for Star Trek the Motion Picture, carbon-copied as NCC-1701-A in a sequel, then finally being outright up-classed in the form of the Excelsior-Class NCC-1701-B in Star Trek - Generations in 1994. Other Starfleet vessels bearing the Enterprise moniker have followed, and preceded, but these three are the focus of this offering under the AMT brand from Round2 Models.

Authenticity to Prototype: “A-”

Overall proportions, dimensions, and layout appear to scale well to online documentation and to actual movie footage. Only notable areas were the deflector/navigation arrays on the original and “refit” versions. The original’s array (dish antenna-looking jobby) is a bit short and the mounting stem is a bit too stout. The refit’s array is flat on the kit, but should be concave. No doubt rivet counters (assuming rivets are still used in the 24thCentury) may find some other discrepancies, but for an old-school Trekkie, these kits really resonated in their overall presentation. One will note when reviewing the Round2 Models website, that there has been extensive collaboration with the original studio model designers to ensure extremely accurate reproduction in the AMT and Polar Lights branded Star Trek kits.

Engineering and Molding: “B”

Molded in light gray and white styrene, there was a bit of flash – some along mating surfaces – requiring clean-up, but nothing a 4-1/2 year-old and a sanding stick couldn’t handle in fairly short order. Surface detail is a crisp combination of the raised and recessed varieties. Ejector pin and sink marks are nowhere to be found on exposed surfaces.

It took us less than an hour per ship in assembly time. Assembly was straight-forward and simple enough for my little modeling buddy to do with minor supervision (mainly cutting parts from sprues), but for a snap-together kit the “together” part was a bit weak, and we opted to flow some Tamiya Extra Thin Cement into all of the seams, and even secured some with clothes pins while drying.

If one were to competitively build, some filling would be required on all subassemblies, but would be minimal due to subject size and overall decent quality of the tooling.

Features, Detail, and Accuracy: “A-”

For a small scale set of kits, AMT captures essential detail. On the original TV Enterprise, there’s not a whole lot to recreate, as it was a very basic studio model, but all of the key features on both hulls, pylons, and warp engines are there. The refit version is a quantum leap in surface detail. Deflector grids, warp engine nacelle and pylon detail, shuttle docking ports on both hulls, and impulse engine detail are all adequately presented. The Excelsior-Class monster captures detail elements on par with the refit version.

For our review samples, we opted to not paint our kits, since most kids would probably not paint theirs, unless they were fairly advanced in their skills and FSA (Formative Styrene Addiction), and the kits were molded in their respective colors. We did wash the kits with dishwashing detergent prior to applying the markings.

Despite some of the following comments and observations, the decals are great!

At this point, Junior glazed over…overwhelming amounts of decals for a little guy … and almost overwhelming for his modern jet-building and stenciling dad! The TV Enterprise only took about an hour to decal, but the other two took 2-3 hours each!

But, am I ever glad I tried the decals!

Super-thin, they require careful and patient handling, and respond extremely well to Microscale setting solutions, and give the “painted-on” look. Any thicker, they would be a train-wreck. Any thinner, the modeler would become a cursing train wreck.

Except for one marking on the bottom of the original’s secondary hull, all decals were printed in perfect register. Colors seemed to be spot-on for the desired visual effects.

The “Aztec” patterns on the hulls and nacelles of the refit and Excelsior-class ships are truly works of modeling art, and I pity the poor designer who was tasked to create them…but they are brilliant! Wish I would’ve had those 30 years ago on the first-release refit kit!

Only notable errors in the decals were on the 1701-B’s nacelles and on the original’s inter-hull and warp engine pylons.

For the “Big E,” the hull numbers on the nacelles read “NCC-701-B,” (lost a “1” somewhere along the way) and the left side is a literal mirror image of the right side. That is, the lettering is backwards! That poor designer must have finally reached wit’s end and decided to just “flip” the artwork on the CAD station. Although it sounds like a big mistake, the lettering is so tiny, the casual observer (and many unknowing contest judges) would never even notice.

For the original “E,” the placement of the screen-like grids on the upper surface of the warp pylons and the windows on the inter-hull pylon do not register to the raised surface detail. Had I noticed this earlier, I would have sanded off the surface detail before prepping for decals.

Although engineered to fit on a single sheet, assembly, painting, and marking instructions were extremely clear and well-labeled. Color call-outs were adequate, and marking guides left no question where the decals belonged. Again, my little apprentice built from the instructions without missing a beat.

Although packaged and promoted as a kids’ kit in the “Cadet Series,” these kits require significantly more work and skill than typical snap kits. However, they clearly have the “right stuff” to build-up into show-quality kits right out of the box for the intermediate and experienced modeler. They have all the ingredients needed to make outstanding display and competition pieces.

All said, I heartily recommend this kit to intermediate and advanced modelers of all ages, and to kids and parents who can be satisfied without applying the countless decals on the latter two versions of Enterprise. As a matter of fact, I will be looking for these at vendor tables at shows this fall and at Hobby Lobby on the 40% coupon weeks – I want to do a set of these little gems for my own collection! Can’t wait to get cracking on the 1/1000 scale “refit’ review sample in the queue -- stay tuned for that one!

Thanks to Round2 for their gracious provision of this review sample…please…keep ‘em coming!