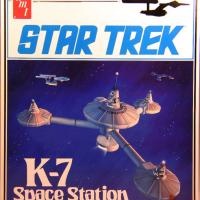 To Trekkers around the world, the K-7 Space Station is most famous for two episodes. First featured in The Trouble with Tribbles [from the Original series], the station was again featured in Trials and Tribble-ations [from Deep Space Nine]. The station is easily recognized by its three arms with saucers at each end. In the 1970’s, AMT released several Star Trek kits, including the K-7 Station. Now, Round 2 Models has revived the old AMT kits, reissuing them as standard and special editions. The kit is basically the same as the original issue; with new decals [the special edition features a collector's tin and a miniature Tribble]. The reissue even includes the little USS Enterprise in scale with the station.

For those who built the kit back in the 70’s, not much has changed. Detail is simple, and the fit is not the worst, but is still far from perfect. I ended up using quite a bit of putty, in addition to my Dremel with a sanding wheel. Construction is fairly easy, however you may need to use a bit of CA glue when adding the arms to the central core.

Since I had worked on Star Trek games in the past, I had a few contacts with great references. I managed to get a hold of some photos of the original filming model of the K-7. These photos show that the AMT kit was not very accurate; however it was originally made from screen shots which always showed the same angle, and thus did not accurately show certain details of the station. In order to accurize the station a bit, I added a section into the lower “hockey puck” making it taller, and allowing for a scratch built shuttle bay to be added [thanks to photos from the original model]. I followed the lighting tutorial, only varying to add a couple micro-LED’s to the “puck” to light the shuttle bay.

When it came to painting, I wanted to go for a more worn look, as the station was located in deep space. After spraying the model black and checking for light leakage [a good way or preventing this is to back the LED’s with modeling clay], I proceeded to spray the model in a mixture of light ghost grey and white. I mixed it to look a very pale gray color. After painting, I used Tamiya flat black in a 1/10 ratio with lacquer thinner. I used this mixture to shade the model. Again, I went a little heavier than normal to emphasize the deep space aspect of the station. Decals went on easily with a bit of Solva-set and were clear coated over with flat. The spire tips were painted accordingly. For the shuttle bay, I cheated a bit by designing the walls and floor in Adobe Illustrator and printing them on photo paper. These were then cut out and glued to the scratch built walls. The ceiling lighting was done using clear acetate that was sanded to a frosted look and back lit. I attempted to build the miniature USS Enterprise; however one nacelle went flying across the room and was gobbled up by the carpet monster.

Overall, while not being 100% accurate to the filming model, the kit still builds up into a good representation of the K-7 Station. Additionally, extra markings are included to model the station as any station number. Although not a “shake-n-bake” kit, the model is not difficult to build, and the lighting tutorial on the Round 2 website is a great bonus. I’m very pleased with how the build turned out, and it looks great on the shelf next to my other Star Trek models. I would recommend this one to all Trekkers and to anyone who wants to build a piece of TV and modeling history. My thanks to Round 2 Models for providing the review sample and to IPMS USA for allowing me to review it.

Inside of the scratch built shuttle bay