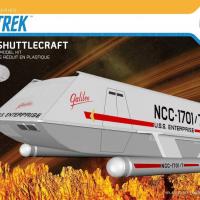 As a hard-core Star Trek aficionado as well as modeler, this is a model I’ve been waiting literally decades to see. The classic Enterprise’s Galileo shuttle appeared in a number of episodes, and was always a fan favorite simply because it brought starship technology down to a human level. Round 2 has seen fit to finally release their long awaited Star Trek shuttle, and it’s been more than a little interesting examining and building it.

AMT released a Galileo shuttle many decades back, and despite its numerous inaccuracies, I’ve built at least six of them over the years, trying to render something reasonably approaching the screen version but with little luck. With the arrival of this new version, I was able to compare the two to each other, and the differences go far beyond accuracy issues. The new version is at least 50% larger than the old AMT model, and yet, both are purported to be in the same scale. The problem, if there is one, has to do with how Desilu Studios handled the filming of this craft. A full-scale mockup was manufactured for external shots, but the internal shots were done on a separate set. Like Dr.Who’s T.A.R.D.I.S., the inside proved to be bigger than the outside. Watching the old episodes, it’s clear that the actors had to duck to enter or exit the mockup, and yet in the internal shots, they can walk around freely with a roof well over their heads.

AMT, I suspect, elected to model their kit (more or less) after the full-scale mockup. Round 2, on the other hand, seem to have modeled their kit on the interior shots, correcting the volume. This meant that the entire model had to be proportionately enlarged to match, hence the difference in two models ostensibly modeling the same shuttle in the same scale. My first pictures show parts from both of these kits side by side so you can get a better picture of their relative sizes.

The irony is that having corrected for the internal volume, Round 2 failed to provide any interior detail to display this correction, although this actually emulates the real full scale mockup as it didn’t have an interior either. There are rumors that Round 2 will eventually be releasing a version with full interior, but the time it took for this kit to appear after the official announcement suggests that it may be a good many years if and when we ever see this.

As a side note, there are many superlative details on this kit which can only be displayed if it is shown in its landing configuration, so I felt compelled to scratch a rough interior so I could logically display this additional detail in a landed mode. As this work is not part of the original kit, I won’t be making much reference to it as I discuss Round 2’s Galileo shuttle.

Externally, Round 2 has wonderfully captured the subtleties of the original, especially around the rear area and roofline, both of which are very poorly represented on the original AMT release. This makes for a somewhat more complex assembly than the older kit, though, and putty work is definitely required to replicate the seamless quality of the original, most notably in the rear and along the engine pylons. Take your time, especially on the rear assembly, as it is more complicated that it first appears, and everything has to be as carefully fit as possible.

The rear maintenance hatch may be displayed open (as seen in the episode Metamorphosis) and includes decals to emulate the fiddly bits on both the door and interior of the hatch. The decals are clearly made from photographs of the actual detail, and although quite good in their own right, are not three-dimensional. I elected to do a bit more scratch work and replicated these areas as well as I could with little bits of scrap plastic. The decals, however, are more than adequate. I opened both the service panel and the rear “light” panel as shown in Metamorphosis. The only addition was adding a support for the maintenance panel using a bit of acupuncture needle.

The rear landing pad is extremely well detailed and even provides articulation for the pad itself. A special note here for hard-core Star Trek fans: the remastered version of TOS clearly shows the rear landing pad retracting in flight, although in the original version it appears to be fixed. No accommodation has been made to show this retracted, although it would be a fairly easy job to scratch this version if you choose.

The engines are far more detailed than the AMT release, and should be assembled separately to simplify the painting process. The balls at the back end of the engines, despite appearances, do not fit all the way into the shrouds and should extend out on their support rods a bit. The entire kit is obviously engineered for lighting, and if you choose to go on this path, the clear caps on the front ends of the engines should probably be frosted. Otherwise, they appear white on the episodes I’ve examined.

Overall painting and decaling of this model is quite straight-forward. I painted mine in a two-tone gray scheme, although there’s some dispute about the authenticity of this version. Even so, it was a simple masking process, leaving the roof off until decal placement in order to install the windscreen without having to mask them. The decals are quite extensive, offering not only markings for the various shuttles mentioned on the program, but also alternate decals for various episodes throughout the series.

In the end, you have a highly detailed representation of a truly iconic spacecraft from an iconic TV science fiction series. My only reservation is mostly concerning scale, as it appears upon completion that what I now have is a 1/24th (or thereabouts) Galileo shuttle with a 1/32nd scale interior. Perhaps, ultimately, it’s best to build the model as-is and forgo any attempts at an interior as this only confuses the scale issue. Despite this quibble, it is still the best and only real attempt to replicate the complex external shapes of this beautiful craft since the ancient AMT kit from many decades past. It makes for a striking model, and I’ve seen some lighted examples that are genuinely stunning. Hats off to Round 2 for making such an earnest effort to get this one right after all this time. Try one out – you won’t be disappointed.

As always, my thanks to Round 2 for this lovely addition to my Star Trek memorabilia collection, and to IPMS/USA for giving this old Trekker a shot at it. Stay safe, everyone, and happy modeling!