Standard B "Liberty" with WWI US Infantry 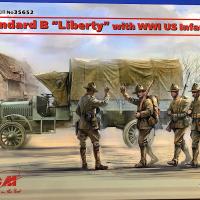 This is the third release of ICM’s excellent kit of the Liberty B Truck. This release includes four figures of WWI soldiers that are extremely well sculpted and detailed.

ICM‘s description of the truck: “The US Army Liberty Trucks produced at the end of the 1st World War were the first attempt in the world to create a standardized range of military vehicles, serially produced by several firms from standardized units.

The most famous were cars of Category B Series 1 with a capacity of 3 tons, which from the beginning of 1918 were produced by 15 American companies. They were hood trucks with an open cab equipped with a four-cylinder engine, a cardon drive of the rear axle with worm gear and cast tires.

Before the end of the war, 9452 Liberty Trucks were assembled, of which 7600 were sent to Europe.”

ICM’s kit comes in a top opening 9” x 12” x 2“ thin cardboard box covered by a slip-over box top. The box art depicts the infantry soldiers marching in front of a Liberty Truck with a full canvas cover and canvas canopy over the cab. The Liberty Truck comes on four light gray plastic sprues and one small clear sprue with the light lenses and windows in the cab canopy. The four infantry figures come on a separate sprue, and there is another sprue with the numerous weapons and accessories for the figures. The plastic parts have nice, crisp detail, and no flash is apparent.

Included with this release are four awesome figures, expertly sculpted and molded by ICM. The figures include soldiers in US WW1 uniforms: a photographer holding a camera, two soldiers marching in full gear, and another marching soldier waving to the photographer. The figure sprue includes a full array of gear for the soldiers. The weapons sprue includes an arsenal of weaponry and other gear. Only a small portion of the weapons are used with these figures so there are lots left over for the spares box. The plastic parts have nice, crisp detail, and minimal flash. The figures have extremely fine detail and the four heads all have different expressions and are very sharp in their detail and molding. The figure assemblies are two separate legs, torso, separate arms, head, and hat. Filling and sanding will be necessary for the arm/shoulder joints. There is some minor flash on the figures. There are indents for many of the gear locations on the figures.

Instructions for the figures are on a separate 8 x 11” page with an illustration of the sprue, color callouts in Model Master paint numbers with generic names, and detailed color profiles showing the assembly of the figures. Part numbers for the figures are called out on the profiles but numbers are not molded on the sprue so reference to the sprue diagram will help identify parts. Instructions for the weapons and accessories are on another separate 8 x 11 sheet with a diagram of the sprue, color callouts, and illustration of each of the pieces. Detail paint instructions are included in the weapon diagrams, and the weapons & accessories are all identified by name on the instruction sheet. I counted eight different rifle types and six different revolvers, some in holsters. There are multiple copies of the Springfield M 1903 rifle, with and without bayonet.

Instructions for the Liberty Truck are an 8 x 11 stapled booklet with 20 pages and 81 assembly steps. The booklet includes a brief history of the truck, list of colors in generic names with Revell and Tamiya numbers, illustrations of each of the sprues, and color profiles on the back cover. The assembly steps are shown in exploded diagrams that include callouts for detail paint numbers. The diagrams are very clear.

Like other ICM kits, the chassis is extremely well detailed with very fine detail on the molded parts. The chassis alone takes the first 33 steps to assemble with an additional eight steps for the engine. The engine is very crisply detailed and includes 17 parts, some very thin pipes and levers.

The fit of the chassis parts is very good. Some of the chassis elements are split into smaller pieces than appear to be necessary, but there may have been a molding reason for this. The leaf springs are two halves with an irritating longitudinal seam that needs lots of cleanup. Assembly of the chassis includes wheels that are molded in halves for the front wheels, and five parts for the dual rear wheels. The chassis does end up being a very nice assembly.

Assembly of the engine begins in step 34, and detailed paint colors are called out for each of the parts. The fit of the parts is excellent and builds into a nicely detailed engine. In step 36, the bottom pulley for the fan belt fits into the hole offset from center in the timing cover, not to the center hole on the crankshaft as indicated in the instructions. The hole on the crankshaft aligns with the hole in the frame crossmember and connects to the starting crank handle. The engine fan fits nicely into the radiator shroud.

Building the truck cab begins in step 43 and attaches to the frame in step 51. The fit of the cab parts are all very nice, and the cab fits tightly to the chassis.

The truck’s cargo bed is built in steps 54 to 62 and installed to the frame in step 63. The truck bed panels are molded without wood grain texture, so I used a coarse sandpaper stick to give them some texture. The truck bed has three options for covering: a full canvas top, exposed hoops, or left as an open truck bed. The truck cab can also be built with or without the canvas cover.

The color profiles both show a Standard Liberty Truck, US Army, 1918, however one option includes a USQMC label on the tarp.

ICM’s Standard B Liberty Truck is a great kit with very nice detail and excellent fit of the parts. The WW1 figures included with this release are wonderfully sculpted and molded by ICM. The kit is highly detailed so there are some small, delicately molded parts that need care when assembling. The instructions are clear, although there are a few discrepancies such as the fan belt and exhaust pipe bracket, so test fitting is helpful. This kit would be challenging for beginning modelers but will be an enjoyable build for more experienced modelers. The kit builds into an excellent model when completed, and the figures are a great addition to the model.

Thanks to ICM for producing the truck and excellent figures included with this release, and for providing the review sample to IPMS.