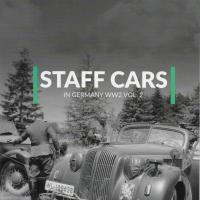 Staff Cars in Germany WW2 Vol. 2, is number 23 in the “Camera On” series published by MMPBooks/Stratus. The author, Alan Ranger, has written over 20 books in the Camera On Series dealing with German and Japanese armour specializing in soft skin and armoured vehicles. With Volume 1 Staff Cars in Germany WW2 # 9 published in 2019, the author presented photographs of passenger cars used by the German armed forces namely the line of Opel vehicles including the Admiral, Kadett, Kapitän and others. A lengthy article on the history of the Opel was presented in his first volume.

This 11.7 x 8.3 inches A4 format paperback has 80 pages with 150 period b/w photographs from the author’s personal collection not the propaganda ones generally seen. The author, in vol. 2 concentrates on the remainder of the Opel passenger cars not covered in Vol. 1. Most are previously unseen and taken by ordinary German soldiers before and during the war. The book begins with a brief forward and a short introduction of the history of the Opel Company whose beginnings in 1862 was the manufacturer of sewing machines, then the production of bicycles in 1886 before introducing the first passenger car in 1899.

The author divides Vol.2 into eight sections with a brief description of each.

The Opel P4, introduced in 1935, replaced the Opel 1.2-liter vehicle which had been in production since 1931. It was a 1073cc 4 cylinder in-line engine having 23hp with a top speed of 53mph. The images in this first section are spread over 4 pages with several clear black and white images and a noteworthy image on page 9 of a P4 taken by its owner presumably before it’s confiscation by the army. The images are printed with mostly two to a page. Even though a few are a bit grainy, most of the detail is noticeable. The author describes in detail with each image what the reader is seeing.

Mock-Up Training Tanks based on the Opel P-4

In the late 1920’s and early 1930’s many of the Opel P-4s were fitted by the German army with metal and a rotating turret to resemble tanks. These were used as training tanks for the Panzer division as tanks couldn’t be produced by the Treaty of Versailles after WWI. The author includes numerous images with detailed captions many with German soldiers on or near the vehicle. Page 15 depicts one of the training Opel P-4’s in a Buntfarbenanstrich camouflage scheme.

Another Opel car manufacture for civilian use was the Opel 2 however, most were requisitioned for military use during the war. The author includes several images of the 2 L along with captions. An interesting photo on page 21 shows a garrison of vehicles including the 2 L painted in Panzer Grey.

The next section examines the Opel Kadett used in the German army. Entering production as the first generation Kadett in early 1937, it had a unibody construction and was offered in two options, either the two-door sedan or the two-door soft top Cabriolet both having a 23 hp engine as the earlier P-4. The second generation Kadett entered production in December 1937 with only minor changes. From 1938 onward two versions were offered, the KJ38 and K38. Over 100,000 Kadett were manufactured many of which were in the hands of the German military. Page 29 (top image) shows a well maintained K38 painted in Panzer Grey with typical German markings of the Heer.

The Opel Super 6 manufactured in 1937 with a production run of only one and a half years had a 2500cc engine developing 71hp. Three versions were offered, a 4-door sedan, a 2-door coupe, and a 2-door carbriolet soft top. As with the other Opel models the Super 6 became a military vehicle seeing service in all areas of the war, however it did have problems in Russia due to its inability to traverse the muddy conditions. The Super 6 was eventually replaced with the Kapitän. The author has included 29 images on the Super 6 in various surroundings including summer, winter with wet and muddy conditions. A clear profile image of the carbriolet taken on June 14th, 1943 is printed on page 40.

Introduced in April 1939, the Kapitän was a replacement for the Super 6. The Kapitän had a unibody construction with the same powerplant as the Super 6. Unlike its predecessor the Super 6 it was also offered in the same 3 versions. Page 59 is an image of a doctor’s car having the medical aid symbol on the driver’s door.

The last vehicle the author writes about is the Opel Admiral. By far the most luxurious vehicle Opel manufactured, it had a separate body and chassis with a 3,626cc 74hp engine. Available in two models, the 4-door sedan and cabriolet. Production was stopped in 1939 due to the use of the engine in the Opel Blitz 3-ton truck. As in his previous sections, the author includes vehicles in a vast array of environments. The author also, includes on page 74 a full-page photo of the same picture used on the book front cover with an interesting caption explaining this vehicle was “Smiling Uncle Albert’s”.

The author, as in his previous books, presents a history of military vehicles using images all containing ordinary soldiers in their surroundings. This undoubtedly is a great resource for the historical buff as well as an excellent reference for the modeler, beginner or skilled. Given the time frame the photos were taken, most are of high quality with an exorbitant amount of detail which the modeler or historian will enjoy. The various environmental settings will be of particular interest to the modeler giving another avenue of inspiration.