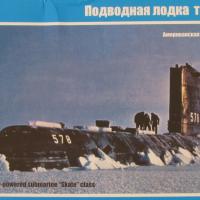 A recent addition to the IPMS Review Corps suppliers is Mikro-Mir, whose kits remind me of what I am used to seeing with limited production manufacturers. This is not a negative comment, but more of a heads up that some building experience is required to end up with a nice finished model at the end of construction. The overall assembly of this kit was fast with only 24 plastic parts, and the 11-photoetch items that I utilized. Modelers with some experience will enjoy this kit, which can be used to represent any of the four boats of the Skate-class (Skate, Swordfish, Sargo, and Seadragon).

The USS Seadragon (SSN 584) was the second ship of the U.S. Navy to bear this name; she was the sixth nuclear-powered submarine and the fourth and final boat of the Skate-class. Her keel was laid on 20 June 1956; she was launched on 16 August 1958 and was commissioned on 5 December 1959. The Seadragon would later be decommissioned on 12 June 1984 after sailing over 200,000 miles, and would end up in the Nuclear Powered Ship and Submarine Recycling Program. The first mission of her storied career took the boat from the Atlantic to the Pacific Ocean by way of the North Pole in 1960. On 12 August 1962, she met up with the USS Skate (SSN 578) at the North Pole where both boats surfaced. She would be the first nuclear-powered vessel to visit Hong Kong, and later Japan as well as Australia.

The USS Seadragon was 268 feet long, had a beam or 25 feet, and a draft of 22 feet, 5 inches. Powered by the third design of the Westinghouse submarine reactor, she was reported as having a top speed of 20 knots. She carried a crew of 95 and was armed with eight 21-inch torpedo tubes (six forward and two aft).

Upon opening the box, you will find the aforementioned 24 plastic parts on three sprues along with a long photoetch fret, instruction sheet, and decals. The construction was quick and relatively easy. I had some gaps to fill on the hull itself, which I did use CA glue, and most of this was hidden once the photoetched deck was installed. You will need to drill holes for the railings around the sail, which I did prior to installing the sail on the deck. My other construction note is that my sample came with a rectangular stand with two posts vice the one shown in the directions that would be round with a single post. Although not difficult, you will need to decide which holes to open in the base, as they are pre-marked, and then measure out and drill corresponding holes in the hull.

I went with the later all black paint scheme for the submarine and used Badger Stynylrez black primer, which looked fantastic. I bought the product at the IPMS Nationals last year, and while this was my first good test of the primer, it passed with excellence. The kit provides decals for the sail and bow numbers, boat name, and water line markings. The decals went down great with only Micro Set over a Future gloss base, but I still gave them a touch of Micro Sol. I left the propellers their natural brass color, and everything was then sealed with Alclad Klear Kote Matte. The base received Alclad Gloss Black Primer followed by their Polished Brass paint.

As far as my hits are concerned, the moldings are good for an interesting subject. The photoetched deck really made a difference with this kit, and the PE anchor, radar, and railing for the sail are great details to have on your boat. There are also PE cleats included, but I left them off for this build. The anchor looks nice assembled, but I will mention that this is a three-piece assembly where the directions show it as being two pieces.

My only real miss for this release is that I would question the shape of the propellers. I would have liked to see a decal provided for the base as well, but this is a personal preference. I was not able to successfully remove the PE antenna for the port side of the sail as it bent at the attachment points when I was cutting it free (using Xuron PE cutters), so I replaced it with a piece of stainless steel wire.

Overall, I would highly recommend this kit to modelers wanting to add one of the Skate-class submarines to their 1/350 scale collection. Most modelers will have little difficulty assembling the kit, but there is some filling, sanding and drilling required as well as the use of photoetched parts, which require some experience to get through.

I would like to thank the folks at Mikro-Mir for providing this kit to the IPMS-USA Review Corps for assessment, and to John Noack for leading the Review Corps, and allowing me to perform this review. I would also send out kudos to all of the folks behind the scenes at the Review Corps who help John with his efforts, and as always, my sincere appreciation goes out to all the folks who take the time to read my comments.

Bow of sub starboard side

Top view of submarine
Previous Next