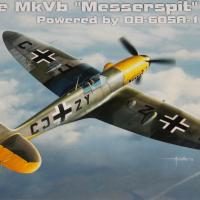 In November 1942 a Spitfire VB EN830 NX-X of 131 Squadron made a forced landing in a turnip field on Jersey Island. This aircraft was repairable and started being test flown in German markings and colours at the Luftwaffe's central research facilities at Erprobungsstelle Rechlin. There it was proposed that the Spitfire's Merlin engine should be replaced by a Daimler-Benz DB 605A inverted Vee-12 engine; the Spitfire was sent to Echterdingen, south of Stuttgart where Daimler-Benz operated a flight testing division.

When the Merlin engine was removed it was discovered that the fuselage cross section was virtually identical to that of the engine nacelle of a Messerschmitt Bf-110G. Consequently a new engine support structure was built onto the Spitfire's fuselage and the DB 605 engine and cowling panels added. A propeller unit and supercharger air intake from a Bf 109 G completed the installation. (Wikipedia)

Packaged in a colorful end opening box are three color sprues, one canopy part, one Photoetch fret, one decal sheet, and a single page of folded instructions. Essentially two of the sprues are a complete Spitfire V with options for a standard nose as well as a Vokes filter option The third sprue is where the magic happens as it includes the fuselage halves for the DB 605A powered Spitfire, the spinner and prop for the 605A, as well as the side carburetor intake parts. The small photoetched fret includes a nicely detailed seat belt assembly, as well as the carburetor side exhaust shield, and the antenna mast. The canopy is crisp and clear and appears to be well detailed. The instruction sheet includes a sprue layout guide, (no part numbers are molded onto the sprue) a guide of 16 small steps to complete the model as well as a paint callout chart with Humbrol paint colors. The reverse side of the box depicts the painting and decal guide.

As with most aircraft kits construction begins with the pilot’s office. Assembly of the cockpit is broken down into six steps and you should have no problems following along. For a 1:72 scale kit I thought the cockpit was well detailed but not without a small fit issue. I did have a few problems with the instrument panel bulkhead fitting of the floor pan, but with a little patience and a sharp hobby knife everything did work out in the end. The cockpit assembly fits into the fuselage halves but I would recommend taking your time, as there is no clear alignment guides to place the assembly in the fuselage. With the fuselage closed up, we move onto the landing gear, exhaust and carburetor intake assembly. The wing is assembled before attaching to the fuselage. The oil and radiator intake parts are added to the bottom surface as well as the inboard canon tubes that you promptly trim off after the parts are attached. The two outboard gun ports are filled in, as they are not needed on this example.

Basically the final two steps bring the wing and other small parts together into the finished model. However, it wasn’t necessarily the proverbial piece of cake. The cockpit assembly extended down a bit too far and interfered with the wing fitting into place. Correcting this interference wasn’t a big problem as I simply attacked the base of the cockpit assembly with my old sprue cutters and soon there was the necessary clearance. I now attached the tailpieces and my MesserSpit was ready for primer.

After a coat of my favorite cheap grey primer, I sprayed the yellow color that is prominent on this aircraft. After a bit of masking, I spayed the RLM 74 & 75 and the color application was complete. In preparation for the decals I gave the model a liberal coat of my favorite gloss coat Tamiya clear gloss. After two days of dry time it was time for the decal application. After a recent experience with another cottage industry kit, I was a bit more careful with the decaling process. I can safely say I had no issues what so ever. After a quick 5-second dip in a warm bath of water the decals gently release from the backing sheet and dropped right into place. I should mention the decals are simply superb. The carrier film around the individual decals is nearly non-existent and they reacted well with the Micro-set. To be honest the Micro-sol wasn’t really even needed on this model.

The finishing touches on this little gem included attaching the landing gear, canopy and the photo-etch antenna mast. You may notice the gap in under the canopy and believe it or not that is called out in the instructions and you should fill it. The other thing I would have given serious thought to changing if I build this kit again is to use one of the plastic antenna mast parts or possibly build up a little thickness on the PE part.

Now that the Messerspit is finished, here are my impressions of this little kit. With the minor fit issues, I don’t believe this is a kit for a beginning modeler. Detail and molding were good and yes, expect to see a little flash on the parts. The photo etch parts were well done and the decals were simply outstanding. And the best part, if you want to build a Messerspit, look no further. Defiantly recommended.

I’d like to thank Brengun for molding this unique little kit and to the IPMS USA for the chance to review it.

Sprue for base kit

Sprue for the DB 605A powered Spitfire

Sprue for base kit
Previous Next