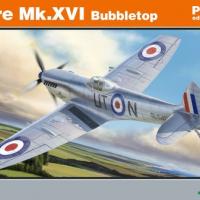 This is the latest Eduard Spitfire release and is the Mk.XVI Bubbletop version. This series is great and I have three of the other version in my stash. As this is the ProfiPack version it comes with the additional the Eduard accessories to add the extra details.

All the sprues are extremely well molded and super fine details we have come to expect from Eduard’s kits.

The kit can be built as any of five versions; you need to decide before commencing the built which you are going to do. I originally was going to do version B but as explained later I ended up finishing it as Version E the personal aircraft of the Air Officer Commanding no 21 Group RAF.

As with most aircraft kits we start in the main office the cockpit. The detail in the cockpit is outstanding! The only issue I found was a couple of small sink marks on parts F26 and F27 which were easily filled. There are a lot of detail parts that really make the cockpit pop out! The only other comment on the cockpit was I found the right hand PE seat belt seemed too long. Other than that the cockpit was a joy to build and looks fantastic. It like a kit within a kit!

Next, we put the fuselage together and install the cockpit, this was very easy and need very little seam filling once complete.

Wing assembly is next and once again this was so smooth; just remember if you are installing the bomb you need to drill out four holes at this stage.

The next step was adding the wing assembly to the fuselage and this was such a good fit I was amazed at how well this fitted, great design Eduard!

Then on to the landing gear and the rest of the exterior parts. Once again it was all very easy and just dropped together.

Now for the paint scheme, not as I mentioned I was going to do the standard Camo scheme as version B but for some unknown reason my masks and paints were not working out for me this time so I when with the all black scheme which I loved once done.

This was a really fun and wonderful build. The kit was a dream to assemble and looks fantastic once completed.

Thanks go to Eduard for providing this kit to review and IPMS USA for allowing me to review it for them.