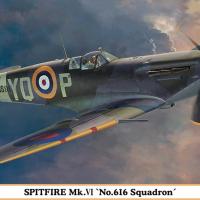 The instruction sheet is typical Hasegawa – that is, the instructions are free of any errors (at least that I noticed), easy to interpret, and with clearly labeled paint call-outs and part call-outs. The thirteen construction steps are on three pages, decal placement and painting guides are on two pages, aircraft history is on a single page, and a parts guide and color call-out list is on a single page.

For the most part, you can jump around on the instructions from step to step. We all do it. Not to worry, but study the assembly process for the prop or you’ll end up having a bit of a mess on your hands. Do not install the blades into the spinner until the spinner has been attached to the spinner shaft. Also, the placement of the six exhaust stacks is unique – the sequence is according to the part number of the stack. Start with the stack farthest aft on each side and work toward the front of the aircraft.

Please note that the seat harnesses visible in the accompanying images are not included in the kit. They are aftermarket items that I chose to include on this project. When attaching the assembled main wing to the fuselage, accomplished in Step #4, it became very noticeable very quickly that there would be some large gaps along the wing roots. With some additional observation and test fitting, the camber along the left wing was noticeably different than that of the right wing. The result of the height difference was that a large step appeared on both wing roots, but much more so on the left wing. A piece of sprue was cut and inserted into the wing, increasing the camber to make the step disappear. After all of this test fitting and camber repair, the gaps were still there but now without the step accentuating the fit problem. On a model that otherwise fit very well, this one problem was disappointing but not without a solution.

Another small issue arose with the propeller blades. A very small step appears on the blades, I’m guessing, caused by a slight misalignment in the molds. This is not a problem if caught before painting and is easily remedied by a few quick passes with a sanding stick.

On the plus side, the fuselage halves mated up so well that, for all intents and purposes, no seam work was needed beyond some burnishing with some fine grit sandpaper. The surface detail is crisp and uniformly very well done. A well-fitting model makes a huge difference not only in the enjoyment of the project, but also in the speed at which it progresses toward completion.

Houston, we have a problem. In short, I found that “silvering” was the name of the game. That, combined with the fact that the decals simply did not wish to snuggle down over the detail on the model. In fact, I had to remove the roundels on the underside of the wing, remove some nice raised detail located underneath the roundels, and then put them back into place. But the big issue for me was the “silvering”. This problem could easily be my fault in that I did not provide as smooth a gloss surface as I could have…or as I should have. In any case, the carrier film appeared to be just a bit on the thick side and it silvered, in some cases, rather badly. I tried to hide it by using the Micro line of decal solutions, and while that made some of the problem disappear I eventually had to weather over the problem areas to make it go away. I was left with a very weathered aircraft. That’s ok….I’ll take a big part of the blame by stating that I failed to provide a smooth surface, while the decal sheet has to take some blame due to its thickness and inflexibility.

This kit is easy to assemble and is an enjoyable project for all skill levels from novice to expert. The least positive aspect of the kit is the decals due to the issues mentioned above, and some of those could very well be self-inflicted. The most enjoyable aspect of the project is the ease of assembly and the superb fit of the vast majority of parts.

This kit is highly recommended for modelers of all skill levels.

Thanks to Hobbico-Hasegawa for providing this kit for review and IPMS for the chance to review it.

Step on the underside chin