Spitfire Mk IXc Late, Part I - What's in the Box 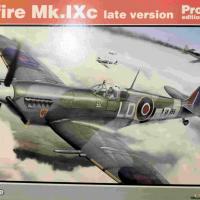 Like many aviation enthusiasts and modelers, I have always admired the beauty of Supermarine’s Spitfire design. Although I am admittedly no expert on the type, when Eduard announced their 1/72 version of an already well received 1/48 family of this aircraft, I jumped at the chance to do a review build. The aircraft’s history is well known and extensively documented, so let’s get on with my impressions of this 1/72 scale plastic version.

This kit issue (#70-121) is a completely new mould tooling. It is significantly more detailed than nearly every other 1/72 Spitfire kit out there, and the resulting high parts count will take me some time to build. As there are already some reviews posted out there on other modeling related sites, I wanted to get this in-the-box look out to our membership ASAP. So, I’ll give you my initial impressions in case you’re considering a purchase sooner, rather than later.

Upon opening the package, one is treated to five sprues of Eduard’s medium gray plastic in two sealed plastic pouches, and one circular clear sprue for windscreens, canopies and other clear parts in a separate plastic pouch. Also included is the well-printed markings decal sheet, a supplemental decal sheet of stencils, and Eduard’s clear, easy to follow pictorial 20-page instruction booklet. Excellent COLOR painting and decaling illustrations are included. Also included are a color photoetch parts sheet for cockpit detailing, and a pre-cut masking sheet for canopy and wheel painting.

Surface detail on the plastic is exquisitely rendered recessed engraving, and surprisingly more plentiful than expected in this scale, for a small, single-engine subject. A quick review of the individual sprues reveals crisp moldings and no flash. The sprues contain many extra parts that look to be a precursor of other Spitfire marks to come. My amateur photos regrettably don’t do the detailing justice. Go to the Eduard website and take a look at their professional shots to get a real appreciation of the detail. I made some quick side by side comparisons to equivalent Spit Mk IXc parts from a couple of other kit manufacturers, and I have no doubt that Eduard’s reasonably priced 1/72 Spitfires will quickly become the benchmark for this type in the one true scale.

I also ordered Eduard’s Brassin cockpit detailing set, and the photoetched flaps set, which I will review separately, along with another masking set that will come in handy after I (usually) screw up my first attempt.

So much for the initial impressions... I’m off to the hobby store for some stronger lenses for my Mag-eyes, and then on to the build. Spitfire enthusiasts, please stay tuned.

Thanks to the IPMS Reviewer Corps and Eduard for the opportunity to review these items.

Wing tips and stabilizers
Previous Next