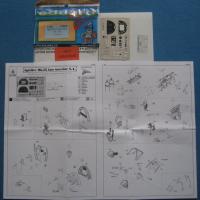 Eduard is right on par with this Photo Etch Set for Tamiya’s Mk. IX Spitfire. The Tamiya kit is just about the best Spitfire kit out there in any scale and they have already done a superb job with the cockpit. So how does Eduard come back with a product that adds a little more detail to this well thought out cockpit? They’ve done it buy adding just a little extra to Tamiya’s parts by pushing up the detail a few notches. The instrument panel is as superb as always and is done in the usual Eduard manor. But parts, such as the gun sight mounting bracket, are exchanged for Eduard’s more realistic holding bracket. This detail adds a realistic subtleness that wouldn’t be noticed until both parts are compared. The throttle boxes are made more realistic just by the fact that less is more. Instead of a clump of plastic formed to have the general outline, it’s made to look like the throttles can actually be moved back and forth. Even small placards are added to show the position of the throttles. The compressed air bottles have a small mounting band in the place of the molded one which adds a bit more realism to this piece.

Eduard added just enough enhancements to the cockpit to raise the level of detail without suppressing the design that Tamiya has spent so much time on to make the kit what it is.

The kit dos not come with seat belts but they are already provided in the model. I have built and painted the cockpit with the parts contained in the kit but I haven’t given it a wash or weathered it in any way to show the kits pieces as best I could after installation. This kit is self adhesive (s.a.) which limits the use of super glue but it can be a bit trying when trying to move the part after it has been pressed down. As always with P.E. parts, work slowly and think ahead. To me, beauty is in the details and this is what Eduard has done. Good stuff!

I highly recommend this kit for anyone wanting to add that extra level of detail to an already fine detailed kit. My thanks go out to Eduard for the sample and IPMS for allowing me to review it.

Looking at the instrument panel