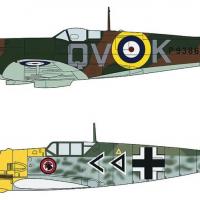 The Spitfire Mk. I and Messerschmitt Bf-109E-4 need no introduction to modelers of any age, so I’ll dispense with the historical background. It is only necessary to comment that these aircraft could have been adversaries, as they were both used during the Battle of Britain in 1940. I would assume that these kits were reissued for limited experience modelers, as most of us have built these kits for years.

This kit is a reissue of a kit that has been around for many years, first appearing in the late 1970’s. I have one on my display shelf dated 1978. I have an early issue kit for comparison, JS-099/A15, and it has no dates on either the box or the instructions, although it might be in some of the Japanese text. Comparing the sprues, the kit is exactly the same, with no changes whatsoever. That said, it is still a pretty good kit. My sample had a little bit of flash, and its main drawbacks are the fact that it has no “gull wing” shape on the wing roots and no wheel well detail. The upper wing panels have two ridges which I assume were some kind of stiffeners, although I can’t find a photo or drawing that shows these on the real airplane. In this, as in the original issue, two canopies are provided, the original flat type and the more familiar bulged version. Both are clear, and show cockpit detail inside. In addition, two props are included, a Watts two bladed prop that looks a little anemic, and a very nice three bladed DeHavilland prop, which was used by most Mk. I and Mk. II types, as well as some earlier Mk. V’s.

In other details, my example had a very slight sink mark near the underside wing fillets, but this is not noticeable when the model is painted, so forget it. The fabric detail on the ailerons and tail surfaces is a little overdone, especially on the rudder, but the overall effect is good, so I ignored this also. There is a seat, stick, and instrument panel, but no gunsight. The radio mast is a little thin, so I replaced it. The underwing radiator housing has nothing inside it, although this is not really visible when the model is assembled. The exhaust stacks are nicely done, and they fit into their recesses in the cowling with only a little trimming.

The decals are good, but a little thick, although they snuggle down easily with a little MicroSet. Some of the long narrow strip decals, such as the wingwalk markers, show some shiny edges that I couldn’t eliminate. There were a lot of maintenance markings, reminding me of some of the recent German kits that show every bit of stenciling. The instructions are clear, so there is no problem here.

There is plenty of reference material on the Spitfire. One excellent resource is the squadron “In-Action” No. 39. An old Dulcimas publication by Peter Moss entitled “Supermarine Spitfire, dating from 1970, is also useful. The Harleyford “Spitfire: The story of a Famous Fighter”, is also good, as are the Profile Publications and the Camouflage and Markings series. One valuable resource is John Beaman’s “Calling All Spitfires” (1975), a detailed analysis of Spitfire kits in 1/72 scale, but be sure to get the one with the extra chapter, because just after he published the first edition in 1974, the new kits from Hasegawa and Airfix came out, and that changed everything. There is no shortage of reference works on this airplane, and plenty of aftermarket decals and accessories.

This kit goes together easily with no surprises. Some filler is required, but wing to fuselage fit is excellent. Things are easy to line up, and once seams are filled in, painting can begin. The camouflage patterns in the instructions are easy to follow, as are the decal placement locations. There is very little masking for the canopy, so this can be installed before painting. In short, this kit goes together quickly, and results in something that looks like a Spitfire.

The instructions provide color schemes for two aircraft in standard Battle of Britain markings. One is “QV-K”, P9386 flown by Squadron Leader Brian Lane, CO of No. 19 Squadron, in September, 1940. The other is “QJ-S”, R6596, flown by Pilot Officer Alan Wright, No. 92 Squadron, and August, 1940. Decals are very complete, in register, and with all of the maintenance markings.

As far as accuracy goes, this kit is almost on a par with the Airfix kit, which got the “gull wing” feature right but has more excessive raised details and panel lines. Otherwise, it’s a toss-up. I built an Airfix kit alongside this one, and both are acceptable kits. Of course with Airfix now making their kits in China, they will be cheaper, but the Hasegawa kit is still a good one, and offers more variations than the Airfix kit. In addition, this kit could easily be backdated to build a model of the Spitfire 300 Prototype, much more easily than finding an old Pegasus kit and struggling with it. Recommended.

Like the Spitfire, the Bf-109E should be familiar to anyone associated with plastic airplane modeling. As with the Spitfire, it was never replaced during the war, and was subject to many upgrades during its career. The Bf-109E-4 was the standard Luftwaffe fighter during the Battle of Britain, and this is the model depicted in the kit.

This, again, is a reissue of the kit Hasegawa introduced in the late seventies, although from the looks of the molding, it is a slightly later issue. It has slightly better panel line detail, a more complete interior, and sidewall details molded into the fuselage interior. The only new addition is a little cast-metal seat which almost fits into its receptacle in the cockpit with a little trimming. The kit includes canopies for the E-3 and E-4 variants, as well as spinners for several different models. Also, the kit provides a bomb rack and fuel tank rack for later variants, so that virtually every model of the Bf-109E can be built from this kit. My model from this kit is dated 1979, so it, too, is an “oldie but goodie”.

Again, there are almost infinite numbers of references available for this airplane. The old “O-Nine Gallery” has a lot of useful information, as does the Squadron “In Action No. 44”. There are a ton of aftermarket decals and accessories for this model.

Assembly is straightforward. This kit has finely engraved recessed panel lines and much more subdued fabric detail than the Spitfire kit. The tailwheel is way too small, however, and I replaced it with one from the spares box. Other details are up to Hasegawa’s usual high standards. The only thing I didn’t like was the molding of the tailwheel, radio mast, and wing cannons onto the primary structure, as these have a tendency to break off. The parts line up perfectly, and only a little filler is needed.

The instructions give paint schemes for two aircraft, a Bf-109E-4 of 1/JG3’s commander, Hptm. Hans von Hahn, in August, 1940, and a Bf-109E-4 of 9/JG26’s Staffelkapitan, Oblt. Gerhard Schopfel, also in August, 1940. Both are colorful aircraft, but I chose the former, as it had the side mottling that looks so nice on these aircraft, as well as the yellow nose and rudder. Both aircraft carry the then standard RLM 71/02/65 camouflage pattern. The decals, as with the Spitfire, were nicely done although seeming a little thick. However, all of the maintenance markings are included, so applying the decals will take an hour or so, depending on your efficiency in this sort of thing. Again, the film edges tend to be visible on a few decals, but they look really good once on the model.

This is a very good kit, and is highly recommended. Airfix did a Bf-109E many years ago but I haven’t seen one in years, and the only other competition until recently has been the Heller and Matchbox kit. The Airfix kit came out in the late sixties or early seventies, and surface detail is not as good as their later issues. The Heller kit is also quite good, while the Matchbox kit is one of their very early releases, and leaves a lot to be desired. Recently, some Eastern European kits of the Bf-109E and Bf-109T have appeared on the market, but they are much more expensive. I’d recommend this kit highly for any version of the Bf-109E you are planning to do.

Thanks to Hasegawa, IPMS/USA and John Noack for the review sample.