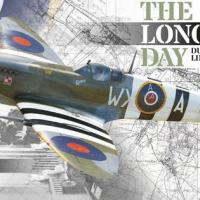 This lovely boxing of a Limited Edition kit includes parts for two complete Mk.IX’s (a “c” variant and an “e” variant) and decals for 6 different aircraft, specifically:

Also included is an extensive set of stenciling, enough for two complete aircraft.

Along with the basic styrene parts, this boxing includes full color instructions and paint guides, photoetched parts, and, for the J.E. Johnson bird, a set of resin beer barrels. I elected to build Johnnie Johnson’s Spitfire Mk.IXe, because the beer barrels appealed to my better nature (grin). This aircraft was actually a composite of several damaged Spits and incorporates a very unique paint scheme as a result. More on that subject later…

There isn’t much to be said about Eduard kits except that careful analysis of the pictorial instructions and prefitting of parts results in a jewel of a model. I went through the booklet and circled all of the “e” version specific variations – wingtips, wing fairings and fillets, etc. I also used a Sharpie marker to highlight the individual trees to ensure I was removing the right part. I usually start my builds by removing and cleaning up all of the individual parts, but in this case I removed parts from their trees only when I was ready to use them. With two complete kits in the box, and several marks of aircraft, it’s easy to confuse slightly dissimilar parts.

As noted, once the very detailed cockpit assembly was complete, airframe assembly is straightforward and the basic model was done in a few hours. I used a touch of filler on the engine covers and one horizontal stabilizer, all other joints were clean. The instructions call out an option for photo-etched landing gear scissor links, but I couldn’t find these on the p/e fret so I went with the plastic kit parts. I like the Eduard approach of molding the wheels and tires separately, which eliminated a masking step.

I painted the beer barrels with Tamiya primer, shot a coat of Vallejo yellow, and then applied a brush coat of Vallejo medium brown to get a wood grain effect. I used some adhesive-backed aluminum foil tape to create the metal banding that attached the kegs to the bomb racks.

After a coat of Tamiya gray rattle can primer, I started with the invasion stripes. I used Tru-Color paints for the stripes, these colors lay nice and flat, with delicate panel lines remaining visible. I spent more time masking this model than any other part of the project; several sessions were consumed to get the invasion stripes aligned and spaced and the dark gray/dark green scheme properly laid out. If you build the version I did, pay careful attention to the color guide, there are some areas in the fuselage stripes that revert to the gray, green and sky colors. Lots of tape was consumed in this project! Fortunately, Eduard includes canopy masks – I dipped the clear parts in Pledge Multi-Surface before masking, and again after painting and mask removal, using a toothpick to clean up any stray acrylic paint.

I shot my standard layer of Testor’s Glosscote, applied the decals, which laid down very nicely, and overcoated with Vallejo Air Matte. I then added the antenna, gun barrels, and other fiddly bits.

I’m really happy with the result here, and eventually I will select another variant and go back and build the second Spitfire. If you have the patience to work with a lot of small p/e parts, and to tackle a fairly extensive masking task, you’ll be rewarded with a petite version of this most famous of British fighters.

Thanks to Vlad and the crew at Eduard for continuing to supply us with review samples.