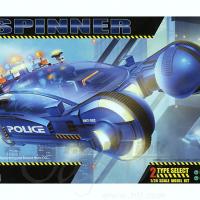 When Fujimi announced a group of vehicle kits based on the 1982 movie Blade Runner, I was excited. This is one of my favorite movies, with great actors like Harrison Ford and Rutger Hauer, moody lighting, and great special effects. The first release in this series is a 1/24th scale Spinner Police Car. The Spinner is one of the iconic cars in the series, as it is a flying police car which can also change to a normal driving car.

Inside the box are eight sprues. Five of these are molded perfectly in white styrene with one perfectly clear sprue for the windshield and parts. Lastly, there is one sprue molded in transparent blue and one in transparent red for the police lights. There is an excellent decals sheet and a small PE fret with “Spinner” logos.

The build starts with the cockpit. I call it a cockpit in that it looks a lot more airplane than car. Careful painting here is worthwhile, considering the size of the windscreen. The seats are separate, as well as parts of the dashboard. The instructions call for a grey interior, and while looking at the internet; I found it done two ways. One was the gray and the other had the cockpit being the same color as the exterior of the car. I decided to go with option 2 and got it painted up. Don’t forget the two decals, also – one for the dashboard and a monitor on the main console. At the same time, I was working on the bottom of the chassis which has two large windows (which were masked) and numerous lights and gas exhausts so it can fly.

At this juncture, we are ready to join the top and bottom. I prepped for this by doing a couple things. I left the clear and bulb parts off the front light, then joined it to the top half. I left the seats out and also left the windscreen off. Don’t forget to add the two back tires prior to closing the car up – they don’t fit well afterward. The top and bottom were joined and the side panels added. Almost no filler was used anywhere – fit was excellent. I did use a dab on the back side of the front wheels where they joined.

At this point, you can decide whether to model the car in car mode or flight mode. I chose flight mode…it does fly. This involves adding the wheels. To the front (wheel wells were painted first) and adding the front covers in the closed flying configuration, which fit perfectly.

One thing that makes this kit so neat-looking is the large windscreen. I masked it with tape and added the seats and tacked the windscreen down with Tenex 7. Little did I know this would bite me later, and badly.

The model was painted overall blue, using MM French Gloss Blue laid down in several coats and set aside to dry. Detail painting commenced with various silvers, blacks, and reds as called out on the instruction sheets. While this was drying, I built the light bars and other small parts, got them painted and set aside. I let the gloss blue dry two days and it was ready to decal.

The decals in the kit are excellent and respond well to the normal MicroSol/Set solutions. The decals really brighten up the car and make it come to life. I let these dry and used Alclad Semi Gloss (it was a working police car).

I pulled the masking off and was mortified that the windscreen and bottom glass was streaked/fogged. It could have been either the Tenex of the CA used on the seats, but the model went from a contest entry to a three-footer in about 15 second. I tried to remove the canopy but it was glued solid. I even broke a #11 blade trying to remove it. In the immortal words of one of my favorite movies – nuts!

I finished of the car by adding the light bars and remainder of the lights and set it back to look at it. It looks great. Goes to show you that even after 300 builds, hurrying is a bad thing.

My error aside, this is a superb kit with great fit, excellent subject, and a good size. Definitely recommended. My thanks to Fujimi, Dragon Models USA, and IPMS/USA for the chance to review this great kit.