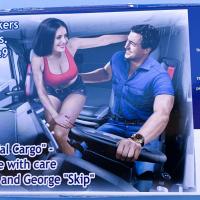 Master Box Ltd, out of the Ukraine, has been a leader in 1/35 figures for a while. They expanded into 1/24 female and fantasy figures in 2016, starting with their first series of six female figures representing the World War II era. This current series, Truckers, is ideal for modern Class-8 truck vignettes and dioramas. Sandy and George “Skip” is the ninth release in this series with more on their way.

The kit comes in a standard end opening box. Pulling out the parts, you will first see that the box is probably three times too large, but in return you get a nice painting on the cover by V. Petelin, and instructions on the back with color callouts in Vallejo, Lifecolor, Tamiya, and Mr Color. I will note that the plastic figures sculpted by A. Gagarin are not identical to the cover paining, but it is very close. The figures represents a truck driver with his left hand on the steering wheel and his other hand on Sandy’s “waist”. Packaging of the eighteen parts are protected within a re-sealable bag.

I would recommend that you wash all the parts to remove any remaining mold release. There are small mold lines present on the parts, but they are easily cleaned up with sandpaper or a #11-scalpel blade. I used Tamiya Extra Thin cement and found it was just perfect for this kit.

I began by cleaning up the few sprue attachments and the fine mold lines. Test fitting showed that overall part fit was going to be very good. The parts are broken down to enhance painting and minimize seams. Sandy is composed on eleven parts. Her legs and hips consist of three parts (7, 10, and 11). I was concerned about the fit of the three together initially, but all three fit well. The torso (Parts 8 and 9) is going to require putty to fix the gaps along the seam-lines. I used Miliput white to fill in these gaps and smoothed out with a wet cotton swab.

If you wish to use Mike Barrington in a Cab Over Engine (COE) design, you will need to adjsut the spread of his legs to get them to fit. I played around a bit and modified his legs with putty till they would fit in a COE interior. I glued the torso together and then attached his head to his torso. I did have to use a bit of putty for the lower corners of the jacket to get the seam where they meet with the upper jacket to fit properly. Next up was to glue the arms on. You want to make sure you test fit the arms so they set correctly on your selected steering wheel. Keep in mind that older trucks used larger diameter steering wheels than current Class-8 tractors. I used a dab of reusable putty to hold either the baseball cap or the cowboy hat.

After that, it's all painting. One of the fun aspects of this kit is that you can paint him just about any way you wish. I base coated everything with Tamiya semi-gloss black (TS-29). I used Vallejo Model Air and Model Color paints throughout and had no issues (other than I need to learn to blend better). I painted his blue-jean jacket and pants Blue (71-004), followed by successive lighter blues to add texture and highlights. His shirt and baseball cap was painted Red (71-269) followed by a Transparent Red (70-934). All exposed skin was base coated with Medium Flesh (70-860), followed by dry brushing Flat Flesh [70-955]. I highlighted with Rosy Flesh (72-100) and Dark Flesh [70-927]. His upper and lower lips were painted Transparent Red (70-934). I painted a faint line on his eyes to simulate eyelashes. His hair and eyebrows were painted a German Red Brown (71-271 before dry brushing his hair with Transparent Red (70-934). for highlights. I used Green Shade Transparent Wash (73-205) on his lower face to help created the ‘unshaven’ look; Red Shade Transparent Wash (73-206) on the middle of his face; and Blue Shade Transparent Wash (73-207) above his eyebrows. I used an Umber Shade Transparent Wash (73-203) on his exposed arms. The cowboy hat was painted Saddle Brown (70-940) with an Umber Wash (73-203). The eyes were outlined in German Grey (70-995) followed by a streak of Aged White (71-132). The irises were painted USAF Brown (71-125) followed by German Grey (70-995) for the pupils. The watch wrist band was painted Gold (70-996).

There really isn't any way to screw this one up, and like the other figures in the series, he can enhance your 1/24 auto or truck vignette or diorama. I am looking forward to completing another kit in this series!

My thanks, of course, to Master Box Ltd for having the nerve to come out with these excellent figures and to IPMS/USA for giving me a chance to assemble and paint it.