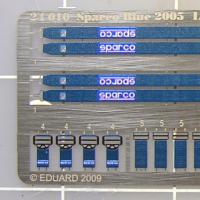 Having recently gotten back into car modeling, more specifically Group "C" type cars, I jumped at the chance to review this pre-painted (blue) 5-point Sparco harness set. As with most high speed racing endeavors, the rules require some very stout driver to seat retention systems (seat belts), but these are poorly represented by either molded-in details or by decals. Eduard has come to the rescue with these excellent looking seat belt/harness sets.

I had to do a little research and stash cross-referencing to see what Group "C" car model that I had that would use the blue harnesses. After a short search, I found that the 1988 Le Mans winning Jaguar XJR-9LM (the Tamiya kit) used this color harness. The belts have a very nice texture to them and the colors are quite brilliant. As can also be seen in the photos, the lettering is very sharp and clearly printed.

The seat already had the belts molded in, but a little time with an X-Acto knife, a seam scraper and some sanding sticks brought me to a bare seat. Due to the details being molded in, there are no slots in the seat where the harnesses would normally go through. Again, a little time with some tools (drill bits, pin vise and X-Acto knife) gave me the three slots needed to fit the Eduard PE belts.

Once the slots were cut, the seat was primed and painted the requisite flat black. I then started to actually read (and follow) the instructions for the seat harnesses. The lap belts are three pieces, including the floor mount. I was pleasantly surprised to find that the PE bent/conformed quite easily to the seat. In the past I've used PE belts in aircraft seats and have often found them to be quite difficult to get a good "hang" or "draped" look from them. Definitely not the case here! With just a little prodding from a cotton swab (I didn't want to scratch or scrape the color), the belts drooped down into the seat pan very nicely (the picture was taken prior to the prodding).

The shoulder harnesses were similarly straight forward in their construction and installation. Eduard makes the mounting straps very long for those vehicles that have the harnesses attached to a roll bar or cage or some other distant mounting point. In my case, the belts are mounted to the bulkhead between the cockpit and engine compartment. The actual attachment point is somewhere between the seat and the bulkhead, so very little of that extra length was needed. The last part to attach is the latch mechanism. This one comes up near the front of the seat and would actually be between the drivers legs. Again, just a couple of simple bends and the latch is complete and ready to mount.

I still need to complete the rest of the vehicle interior, at which point I'll add a mounting bolt (hex head) to the floor and "secure" the seat belts to the car. I was easily able to drape one of the lap belts over the side of the seat in preparation for the driver to buckle himself (or herself) in.

This harness set definitely adds some color and three dimensional perspective to the drivers seat with little effort. There are enough parts for two seats, so if you're doing a WRC (World Rally Car) vehicle, you can secure both the driver and navigator with the safe great set of belts.

I'd like to thank Eduard for supplying this fine review sample and IPMS USA for allowing me the opportunity to review them!