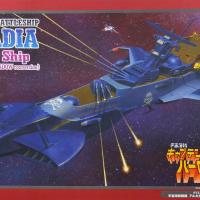 Sleek, magnificent, deadly. A single look at the Phantom Death Shadow will tell you all you need to know. She's a predator angled and shaped with a single purpose: destruction. Lethal Pulsar cannons in triple mounts sit idle 'til they reduce enemy warships to cosmic dust; the blade ram waits to split hulls and spill crews and cargoes to the cold, black emptiness of space. She's a piece of lethal art that deserves a spot in your display case. Kit features 2 Cosmo Wing fighters and display stand.

I’m sure I have mentioned in previous reviews I have become addicted to Japanese anime and when the chance to review the Arcadia came along I took a chance. Admittedly I have not had a chance the watch any of the “Captain Harlock” anime shows but I’m sure I will soon. Check out Hulu.com or chrunchyroll.com to watch. Captain Harlock dates back to 1953 and most recently appeared in an anime movie as of 2013. The space ship, “Arcadia”, actually dates back to an anime series from the late 70’s. So with a little background taken care of, let us get on to the kit….

Hasegawa has packaged a very fine representation of the Arcadia, (second version) molded in no less than seven colors and includes a nifty display stand, a full color set of instructions and a decent set of decals. I decided to build this as a throwback to my youth and built her completely without using any paint. I’m happy to say in advance of this review that any basic to average young modeler should be able to build this model and end up with a fine looking space pirate ship at the end of their efforts. Although the younger and less patient modelers may need a little help with the decals as they can be a bit fiddly.

Unlike my normal aircraft builds, there is no cockpit to start construction with. The construction follows a logical progression from the main hull, fore and aft sections, through adding the various bridges, decks, wings, engines and other fiddly antenna looking parts. The stand made construction a lot easier because you can use it to hold the model off your workbench while cement is drying. I want to point out the only real issue I had was joining the fore and aft hull sections. The fit wasn’t on par with the remainder of the kit and in all honesty, I can’t be sure I didn’t cause the problem in the first place. In hind sight, I should have dry fit a bit farther into the construction process and I think it would have been just fine. Beyond this one issue, I think the fit and finish of this kit is superb. After completing the ship, I gave her a quick spray of gloss coat and then tackled the decals. For the most part they went down without a hitch. You WILL need some Micro-sol or Mr. Softer (mentioned in the instructions) to make some the decals fit around the raised features. Most of the decals are placed over a corresponding raised feature so if you are so included most of the decals could be replaced with some tiny paint work. If you tackle that job, you’re a better man than I, Gunga Din. The two large decals on either side of the aft section (that wrap around the bay windows) should be cut in half to facilitate application. Other than that, just be patient and take your time.

I completed the build with a second gloss coat and now she sits finished on my shelf ready to do battle. I would estimate a total of 8 or 9 hours from cracking the box open to touchdown on the shelf.

I would highly recommend this kit for all modeling skill levels. Thanks to Hobbico / Hasegawa USA and the IPMS USA review staff for the chance to review this awesome kit.