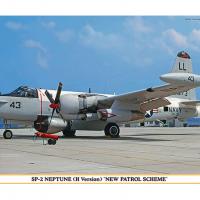 Opening the box you’ll notice that this is the original 1970s’ mold Neptune, and the molds are starting to show their age. Many of the parts had some bit of flash to them. Thankfully though they were very easy to clean up. The second thing you’ll notice is that the directions have many photos of Neptune’s, but they are of the Japanese version of the aircraft. The build though is the same no matter what version you are doing so no need to worry that the photos don’t match the exact aircraft.

Step one of the build begins in the cockpit, or should I say lack thereof. The kit only gives you two seats and a panel. You do have a choice to add pilots but that still doesn’t add much. I painted all the parts and the interior of the fuselage XF-82 and then scoured the internet to see what I could do to busy up the workspace. I found that Eduard made an update set for the plane from their ZOOM line, and it was available, so I added it to my build and it really fleshes out the area. It adds seat belts, arm rests, a new panel and center console, control columns, yokes, and an overhead panel, along with some other various bits that the kit sorely lacks. So once that arrived I added those parts and completed the cockpit.

Step two has you adding all the fuselage windows, optional dorsal turret, completed cockpit, observer’s station and nose wheel well into a fuselage half, and once all that dries sealing it up with the other fuselage half. When seeing this step before starting the build, I immediately took the clear sprues and gave them a coat of Future for that “glass” look so that they had time to dry before construction. I also confirmed that the dorsal turret is not needed and just added the clear circular window that comes with the kit as well. One word of caution, make sure all the windows are very secure when you glue them in! There is no easy way to re attach them once the fuselage is closed as the widows attach from the inside. Also there is a side drawing that shows how the cockpit, nose wheel well, observers area, and nose weight should all connect together. I added the recommended 30 grams of weight below the cockpit and above the wheel well and it worked great. Setting the now completed fuselage aside to dry it was on to step 3 and 4 engines and wings.

Step three has you building the radial engines and propellers along with the engine housings. I recommend holding off on the props until the rest of the build is done so as not to damage them. As for the engines you really don’t see much of the radials, so I just painted them flat black. The cowl does fit very nicely to the rear portion which I had painted “steel” using Alclad paint. The separate paint diagram shows this, but the instructions do not. I recommend you do this ahead of attaching the engines as it will be hard to paint later. These “power eggs” are one of the highlights of the kit when you add the exhaust and cowl flaps in a later step. Also disregard the paint diagram for the props in the instructions as there is a new version on the new decal sheet diagram for this aircraft. The last thing I did was paint the cowlings overall Tamiya XF-20 so I wouldn’t have to paint them once attached to the aircraft.

Step four has you building the wings and horizontal stabilizer and attaching the one-piece rudder. The rudder and ailerons are separate parts, but the elevators are not. Each wing and stab are made up of two pieces. I used tape to note which stabilizer went on which side as they are not keyed and can be reversed by accident. Once the sub-assemblies are dry you attach them to the aircraft. I had to trim the attachment points for the wings but overall, they attach easily and form a very strong connection with very little filler needed at the roots.

Step five and six builds the main gear wheel bays and the multi-piece main gear along with the wheels themselves. It took me a little bit of trial and error to get it just right but the bays do build up nicely and help form a very strong main gear. I did not attach the gear doors as the directions say to avoid knocking them off later in the build. Also, I recommend painting the interior of the wells and gear legs before construction as once it’s altogether it won’t be easy to paint inside.

Step seven is the nose gear and this is a bit simpler in construction than the mains as it’s just a two-piece gear leg and the gear doors. Again, I did not attach the doors. Lastly I built the main wheels. They look good but do not have a weighted option so some work would be needed to flatten/bulge them. They were set aside for later painting.

Step eight will have you adding the exhaust ports and cowl flaps to the radials from step three. I painted these parts ahead of time. The exhausts got a coat of stainless steel by Alclad as did the undersides of the cowl flaps. The outside of the cowl flaps got a coat of Tamiya XF-20 medium gray to match the overall color of the cowling. There are two very good diagrams next to step 8 that show exactly how each part attaches for the left and right engines. It made things very easy. Step 9 has you building the auxiliary jet engines and large tip tanks/search light. The engines have no interior and the fronts have “doors” that are closed. The backs are open so I put some Plasticard inside to blank them off as well. The tip tanks are both made up of two halves as well and go together easily. Once these were dry I sanded and filled the seams as they are a bit noticeable.

The last step in the build is step 10. They would have you add the nose glass, cockpit glass, tip tanks and aux engines along with the large pitot tubes up front. I left the jets, nose glass and pitot tubes off but added the rest. The cockpit glass is made up of two halves and takes some work to get correct. Also if you are using the Eduard set add the overhead panel and interior hand holds. Don’t worry too much about the seam from the cockpit halves. It does need to be filled but there is enough room to carefully sand without needing to polish the windows. At this point it was time to putty, sand and paint.

Since this kit was designed in the 70s it has raised panel lines. With newer kits I tend to re-scribe the lost detail after sanding and puttying. I did not do that with this kit and it actually worked out fine. As I prepared to paint I realized that masking this kits windows was going to be a chore. Eduard to the rescue again. They make a mask kit for this and it’s highly recommended. It made masking all the windows a breeze. Especially the bulged cockpit windows. Once the masks were applied it was time to putty and sand. There are some fairly obvious seams down the centerline and around where the cockpit windows attach to the fuselage. It took a few tries but overall I got them to disappear without too much trouble. There is one spot underneath aft of the weapons bay though that is a bit tricky. There are a couple bulges that need careful sanding so as not to flatten them but it’s nothing too difficult. Very little filler was used on the wings and tail. The cockpit had a bit of a raised lip in the rear but some slow and steady sanding along with some filler made it smooth out. The wheel bays were then masked off to protect the paint already applied, the cockpit was given a coat of interior gray and then the entire kit was given a coat of Tamiya primer and it was on to final paint. While the primer was drying I painted the wheels and the various antenna that Eduard provides as add-ons and replacements for the kit ones.

The two paint choices given for this kit are from VP-30 and VP-69. Both are standard navy schemes. Overall white upper fuselage with gray sides and bottom, and black cockpit and glare shield. First, I used Tamiya XF-2 flat white for the upper fuselage. All areas that required a coat of Tamiya XF-20 medium gray, which was most of the aircraft, were taped off. Finally, areas that needed Tamiya XF-1, such as the cockpit, glare shield, and various radomes, were taped off and sprayed. Then it was a coat of gloss clear to start decaling.

The decals for this kit are great! There is a decent amount but not the hundreds you see on many modern kits these days. They go on well, have just enough thickness to be forgiving, and settle down nicely with just a little bit of Microsol/set. I chose to use the ones for VP-30, choice one on the markings addendum. Starting with the wings and top I worked my way down the sides and underneath. Overall it took about two hours total. Once the decaling was complete a final coast of Tamiya flat clear was sprayed and it was on to final assembly.

Final assembly consisted of removing all the masking, attaching the wheels, engines and tip tanks, attaching the nose glass and then using the rest of the Eduard photo etch to replace or add various antenna that were either too thick in plastic or not on the kit at all. One final antenna wire from EZ Line and the Neptune was ready for extended patrol on my shelf.

This kit really does hold up well for its age. The molds are getting a bit worn, but not bad, and there wasn’t any warping or short shooting of parts. I highly recommend this kit for anyone that wants a Neptune in their collection and I thank Hobbico/Hasegawa and IPMS for allowing me to review it.