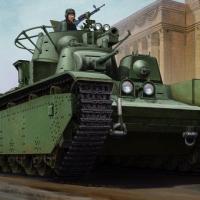 Having always had a thing for ungainly engineering excesses, especially Russian ones, I’ve built multiple copies of the ICM version of this vehicle, which features the earlier cylindrical turreted design. The Hobby Boss item displays some fundamental differences in kit design, however, most notably the single piece bottom hull and link-and-length track, both of which simplify assembly immensely. The kit also supplies clear lenses for the headlights and spots, copper braid for the tow cables, and no less than three frets of photoetch parts.

I was amazed at how quickly the running gear went together, taking all of a couple of hours. That being said, there’s no point in investing a whole lot of energy to this stage of assembly as most of it will disappear behind the large side shields anyway. As a note here – leaving the side shields off is not an option, as they figure in the running gear support. Take your time fitting them, as there are a lot of connections to make.

Construction of the hull was relatively straight forward. Unlike the ICM version, no attempt has been made to depict the interior, although all the machine guns come with separate magazines, which seems rather pointless under the circumstances. In addition, the large cover over the engine fan is offered both as an opaque and clear item for no reason I can readily discern. Even if an aftermarket engine were installed, the clear version isn’t really all that clear. Go figure.

In order to better understand the T-35 in use, I searched the internet for pictures of this particular variant. I found photos of what appear to be two different machines, both abandoned on a roadside along with the usual cluster of smirking Wehrmacht officers. However, examining the pictures I noticed an interesting detail Hobby Boss might have missed. One picture showed the driver’s hatch open, and it appeared to be identical to the hatch on the machine gun turret. Hobby Boss elected to depict the driver’s hatch in the earlier split design, but the kit includes extra copies of not only the machine gun turret hatch but even the hinges associated with it. Consequently, I went ahead and installed the kit hatch, sanded it down flat and then overlaid the other hatch – a simple conversion. Be aware, however, that the real machines were virtually custom built, so this modification may not really be necessary.

Ultimately, only a little putty was required around the turret pedestal. A note here – when installing the fenders, be sure that they are precisely aligned with the top of the hull. I managed, of course, to lose one of the headlight covers to the carpet god, so had to scratch one with a bit of effort. I also elected not to use the provided copper wire for the tow cables, instead making them from fine braided solder for flexibility. Overall, everything on the hull went together smoothly with no real hitches.

The turrets were next, and once again, no real challenges were encountered. I was at first put off by the smooth texture on these – I’d assumed that they’d display a bit of surface pitting like other Russian turrets I’ve worked with. However, every picture on the internet showed them as virtually flawless, so the kit depiction is correct. Only a tiny bit of putty was needed to fill the seams on the backsides of the main and machine gun turrets. There was also a bit of gapping with the MG turret tops, but nothing a small dab couldn’t correct.

The main turret offers a choice of radio railing and rear machine gun position, but I couldn’t locate a single picture of a radio-equipped unit actually used operationally. As for the rear gun, apparently only two of the six in this final configuration featured one, so I elected to leave mine off. However, if you want to add it, be aware that the kit supplies a spare MG so you can fully arm your tank, although the instructions make no mention of this. My only grumble with the options is that the radio rail mounts on a series of photoetch plates, making for a presumably fragile final assembly. However, not choosing this option myself, I may be mistaken.

Final color schemes are pretty straight-forward; any color as long as it’s green. Although the kit provides decals for a triangular-marked sample, I’d actually employed similar markings on one of the ICM kits already in my collection (as evidenced by the comparison photo). More importantly, no internet pictures found showed any markings on these behemoths whatsoever. With this very simply paint scheme, you can employ your weathering skills to the fullest.

Examination of this model in comparison with the ICM kit of the same vehicle shows just a few modest changes to the hull, most notably around the muffler and side shields. The turrets, of course, are a different story. Both vehicles are otherwise dimensionally similar in every respect, which is hardly surprising.

Ultimately, I am very, very happy to add this fascinating vehicle to my collection. I’ve always wanted to have the final version of this engineering marvel for my own, and Hobby Boss has provided for this desire in an easy and enjoyable kit. Even the photoetch – usually my bugaboo on a build – went together with little trouble, including the elaborately folded side ladders. I did manage a couple of fumbles on the build, but these were errors on my part and had nothing to do with the kit itself. All in all, though, I can’t remember having had this much fun building a model in quite a long while.

My hat’s off to Hobby Boss and MMD/Squadron for making and offering this fine product for review and of course, my thanks as always to IPMS/USA for a chance to play with this one.