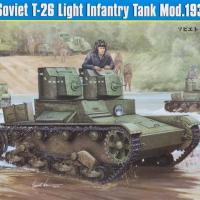 The T-26 tank was a Soviet light infantry tank, and was a development of the British Vickers 6-ton tank. Many consider it to be one of the most successful tank designs of the 1930’s. With more than 11,000 made, it was the most produced tank of its period.

The T-26 Served in many conflicts of the 1930’s and was used during World War 2. The tank served with the armies of Turkey, China, and Spain. In addition, the Finnish, German, Romanian, and Hungarian armies used captured T-26s.

The kit is 100% all-new tooling and consists of over 988 parts. It comes packaged in a very sturdy corrugated box featuring an interesting illustration of T-26s parading across a stream. The bulk of the plastic is molded in dark green while the elaborate track system comes in a neutral brown. The kit also included a comprehensive 30-piece photo etch set. Hobby Boss offers different radiator and turret options. Other items included are well-illustrated instructions and a small decal sheet. Lastly, there is a double-sided multi-view color plate featuring the two decal options.

As with almost all model tanks, the build began with wheels and bogies. I found the drive wheels to be a chore and the bogies to be an even bigger chore. To elaborate, the drive wheels have way too many small parts that must somehow all come together as a unit before the glue sets. In addition, the small bogie wheels have a weird, bumpy mating surface complicating alignment when pairing the sets. I think a better construction design in the kit could have easily been found and would have made this process a little more enjoyable. The next few steps included attaching the bogies to the hull, adding hull plates to the wheel areas, adding the rest of the wheels, building up the upper hull and turret deck, and adding all the standard smaller items. I found this part of the build to be very rewarding. Everything went together very well and I encountered no difficulties.

Moving up to Step 7, the track link system, I found this step to be a time bandit – but the end result is worth the effort. There are 113 links required for each side, and each link has to be double-pinned. Hobby Boss supplied a jig board allowing up to 14 links to be joined at a time, and when done correctly results in a articulating track section. My other gripe besides this deal being a time bandit is that the jig is set too tight, forcing the links to buckle and spring up and out of the jig, thus causing damage to the links and pins. My solution was simply to do half the jig at a time…bandit.

The next 3 steps covered the fenders, grilles, muffler, jack, tools, and tool boxes. The fenders are heavily embellished with photo etch and really come together quite well. The muffler is made up of no less than 7 parts and has a good construction design. The large jack riding piggyback on the tank is fairly simple and looks pretty nice after a good seam sanding. The other stuff went down without a fight, but the horn (part F-23), though not listed, shows up in the illustrations.

I like it, I like it a lot. It’s a great kit but has a few weak design issues. I would recommend this one to the more experienced modeler.

Thanks to Squadron for supplying the review item and IPMS-USA for allowing me to review it.