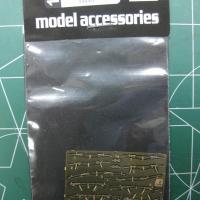 Most of the time, Figures in small scales, such as HO (1:87) are armed with weapons that roughly represent their 1:1 scale real-world counterparts at best, and more often than not, look like sticks or worse.

If you have any 1:87 scale WW2-era Soviet troops that need improved weapons, this is for you.

The small arms are very highly detailed, historically accurate, and are folded in half to represent both 3D sides of the weapon. Iron sights and bolt-action levers, as well as magazines, and even triggers and trigger-guards are represented very well on the models.

As seen in the picture below, I have assembled the Mosin-Nagant standard infantry bolt-action rifle.

I would only recommend this kit to a modeler with sufficient experience with Photo-etched brass kits, and of course, only to modelers who already own some unarmed 1:87 scale troops.