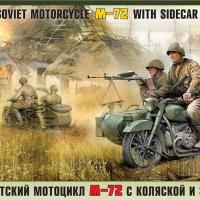 After the Winter War with Finland, the M-72 motorcycle was built in the Soviet Union as a replacement for the two outdated heavy types already in service with the Red Army. As an odd twist of fate would have it, the Molotov-Ribbentrop Pact provided the necessary legal, political, and economic environments that allowed the Soviets to build the BMW R-71 that had been rejected by the Wehrmacht as the M-72. The short-lived pact agreement included that BMW provide the design, tooling and training to build the motorcycle and military sidecar. Proposed manufacture was to be in three factories located in Moscow, Leningrad, and Kharkov. Only Moscow produced any M-72s prior to the German invasion.

The Moscow factory was moved east to Irbits, a town in western Siberia and renamed IMZ. The other two factories were relocated to Gorkiy and renamed GMZ. During the war IMZ and GMZ produced the M-72. However, all sidecars were built at GMZ and almost all M-72s had the sidecars. Only a few escort duty M-72s were solo.

We are greeted with nice artwork on a sturdy, colorful, well-illustrated box measuring 10.25” X 6.5” X 1.5” that opens from the ends. Inside, we find sealed in a clear poly bag 3 sprues, 1 decal sheet featuring 2 options, 1 parts list and 1 instruction sheet.

The parts are molded in a medium tan color, featuring sharp detailing with no flash or sink marks. You have two sets of crew, a combat in-action crew and a relaxed having-a-drink crew.

Due to the nature of the subject, extreme care must be taken when removing parts from the sprue trees. Small, very delicate parts are common with motorcycles of this scale. Also, the same care needs to be exercised when handling these parts during construction. Figures are also included and, if you choose to use them, I suggest you carefully test fit them during key construction opportunities.

Starting with the engine, the first 3 steps of the instructions cover its assembly. It required 15 parts to complete and was set aside, ready for the paint shop. Next up, the motorcycle frame component was covered in step 4, oddly broken down and quartered. In 4a, you attach the horn to the mid-frame center section sporting the battery and relay boxes, 4b the front fender-halves mated to the front forks, 4c and 4d cover the side frame work and rear struts, then adding the frame backbone as all these sections come together in the overall illustration of the step. Steps 5, 6, and 7 also include sub-part constructions detailed in the instructions, basically mating the engine and frame components and adding the drive axle, exhaust pipes, rear fender, and fuel tank. Step 8 makes up the wheels. Step 9 covers the sidecar frame component, no less than 5 sub-steps involving 3 sub-components using 12 fragile parts. I suggest a trip to the paint shop here before finishing the step by attaching it to the motorcycle. Step 10 is seats, 6 pieces and attach to the bike. Steps 11, 12, 13 and 14 cover assembling the car and accessories, during which several trips were made to the paint shop. The figures are covered in steps 15-22.

A very nice kit and an awesome subject. I recommend it to anyone who likes something different, rewards, and a challenge.

Thank you, ZVEZDA, for making this wonderful kit; thank you, Dragon USA, for supplying it; and thank you, IPMS/USA, for the opportunity to review it.

With figure
Previous Next