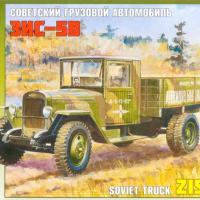 Initial construction of the ZIS-5 truck began in 1933, and ultimately the Soviets produced a million examples of this cargo truck. Wartime shortages of raw materials necessitated much of the truck body to be made from wood. The normally stylish/rounded fenders were simplified to the simple, squared-off examples represented here. I’m sure many of these trucks made the grueling winter crossing of Lake Ladoga to keep Leningrad supplied during the three-year siege by the Germans.

Zvezda provides a very sturdy box, one which I would kill to see other manufactures follow suit and provide. The interior box is a corrugated design featuring an attached lid and a standard thin slip-over box cover. Opening the box reveals a very beefy set of sprues with some of the parts showing a little bit of flash. The plastic is THICK, but, then again, most of the body is wood. The wood pieces scale out to about an inch and a half true size. Decals are provided for two trucks – one in an all-green livery, with the other being a three-toned camo design. At first glance, the decals’ white lettering appears to be a bit creamy in color, but upon closer inspection the carrier film also exhibits a yellowish tone. (More on this later.)

Construction begins with the engine. My second disappointment in this build was the engine. The two halves appeared to have been designed by two different people. Each of the halves was the same length, but the engine block and transmission housing were different lengths between the two pieces. A little work with a coarse grit sanding stick took care of the problem. Most of the engine will ultimately be covered in the completed model unless you decide to open the hood. Engine detail is adequate for the closed hood, but a bit more detailing would be needed if you open up the very thick hood part. The frame is assembled next. This is where I noticed the mold halves are not aligned very well. This flaw is most apparent in the two main frame pieces and, more notably, the leaf springs. Some sanding will be required to take care of this issue. The frame is also a very critical portion to the assembly process. Take your time and make sure the frame pieces are squared up properly. It might even be helpful to build a simple jig to aid in the frame’s assembly. The crosspieces do not fit positively into the side frame parts, so it is very easy to wind up with a parallelogram as opposed to a nice rectangle.

The instructions show the radiator part being attached in this step of the build. Ultimately, the radiator will support the front of the hood, with the cab supporting its aft end. You may want to delay attaching the radiator until later in the build. I didn’t try this, but in hindsight I should have given it a try. I had to break the radiator loose later in the build to get the hood attached properly. Out of the box, the running boards were bent/curled pretty severely. It wasn’t a big deal, but they will need to be gently messaged back to straight. Carefully over-bend them the opposite direction until they stay straight.

The next major assembly is the cab. My suggestion here is to square up the rear of the cab to the floor part. (Ask me why I suggest this.) The other suggestion I offer is to leave the steering column loose until the cab is complete, then cement it in place at that time. The clear parts are inserted at this time. They too are thick, but unless you cut open the front window, you will not notice the non-scale thickness. Otherwise, the clear parts are good. The front and rear cab pieces are attached to the frame at this point. I didn’t see precisely where the parts fit into the frame and, needless to say, my cab is a bit skewed to one side.

As I mentioned before, the hood, and the side pieces fit between the cab and radiator. Get the alignment right. The last step with the cab is to attach the doors and top. The rear cab alignment (mentioned earlier) is key to the top fitting correctly. My example had a gap at the rear of each door, most likely as a result of my cab alignment issues.

Next in the process is the assembly of the drivetrain parts. I found the fit of the front hubs to their support part a bit poor. The differential assembly wasn’t too bad, but for me it was a lot of trial and error. The rear brake hubs are keyed and, for whatever reason, I didn’t notice that fact. When I sorted that issue out, I had pretty much boogered up the suspension arms. Lastly, the engine and drive train are mated with the frame and cab. The fit is okay, but the exhaust left me baffled. There didn’t seem to be a clear-cut location on where it goes.

The last major assembly is the truck bed. I had no hitches with this part of the build, and the truck bed and the support members fit in place well. The tires and rims will need to be assembled if you have not tackled it before now. The tires are solid and the rims didn’t drop right into place. I used my scalpel and carefully removed very thin layers of the tires until the rims did fit. Don’t force them in!!!! (Again, ask me why I know.) With a little work, the rims will drop right into place.

With construction complete, I shot a base coat of green and freehanded the tan and brown camouflage on the truck. I should note that the rims were painted ahead of time to save me having to mask them after the fact. The wheels were attached after the truck was painted and clear coated. Next came the dreaded yellowed decals. Oddly enough, after a few seconds in the water, the yellow tint disappeared and they dried on the model a nice bright white. Go figure. The decals behaved reasonably well with Microset and Microsol. A little extra effort will be needed with Microsol on the truck bed where the decals wrap around the bed supports. It might even be helpful to do a little cutting with a razor blade to get them to settle into place.

The Dragon Models USA website indicates this model kit is a re-issue but it does not mention the original issue date. The detail in this model is a bit weak compared to today’s wonder kits, but it is not hateful. Fit was generally okay but not the best, again compared to today’s kits. Although the kit is not complicated with hundreds of parts generally found with newer armored/military vehicles, I believe that construction would be a bit much for a first-time builder due to general fit issues.

I would like to thank Dragon Models USA for supplying the review kit, and IPMS USA for the chance to review this Soviet transport truck kit from Zvezda.