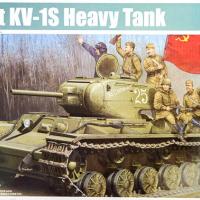 I want to begin this review with a disclaimer. I am not an armor guy. I am an airplane guy. But I just wanted to try out – at least once – building an armor kit.

This kit has about 440 plastic parts, about half of which are individual links for the tracks. It also has a small photo-etch fret and a turned metal barrel for the cannon. The surface detail is superb and there was no flash whatsoever in my example.

Assembly of the hull and rolling wheels is simple. I had all the body and wheels assembled in about 4 hours. Fit is good, with little need for filler in the body. The turret is molded in two halves, which leaves a large seam that needs treatment with filler. It is not difficult, just a bit surprising, given that the rest of the engineering of the kit is really good.

The only parts with ejection pins marks are the lower sides of the fenders. I choose to fill them in, but once the model is completely assembled they would not have been visible. There is a very shallow sink line running the top length of the fenders. It is very faint, so I choose not to worry about it, as I was concern that filling and sanding the top length of the fenders might bring more work by having to re-scribe and restore surface detail. It was a good decision, as once painted and finished is not visible.

The kit has no interior, but every single hatch and access panel has been designed to be posed open. I would expect that shortly there will be several aftermarket detail sets for the fighting compartment, engine, and transmission.

Assembly of the tracks with individual links was a bit of a challenge, and certainly it was time consuming. It took me about 6 hrs to prepare all the links and assemble the tracks. I was able to get some sag on the tracks by pushing some rolls of paper between the tracks and the fenders at the locations where I wanted the tracks to sag, before the glue was completely set. Despite the long and somewhat boring process of preparing the tracks, I like the result. One more thing on the tracks: I’ve read online that the width of the tracks is not to scale. I did not worry about that, but other modelers might want to get aftermarket replacement tracks.

Another word regarding accuracy: Apparently the KV-1S had 5 fuel/oil tanks on top of the fenders, but the instructions only say to install 4. You are in luck, as the kit includes 6 tanks with the plastic parts. I choose to follow the instructions, but if your references show 5 oil/fuel tanks, you have all that you need in the box.

The decals went fine over a coat of Future, and weathering was kept to a minimum by just applying an overall dark brown wash to bring out detail. I also applied a few streaks with oil paints to break up the overall green finish.

As I said at the beginning, I am an airplane-guy. You might then wonder— did I have fun building an AFV? The answer is a rousing “yes”. Anyone would have a good time with this kit.

Highly recommended to everyone, except the most novice modeler.

I would like to thank Stevens International, Trumpeter, and IPMS/USA for the review kit.