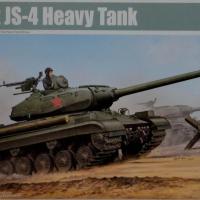 To say that the appearance of this kit was a surprise to me, is an understatement! Lately, it seems that all we ever get on the ‘new’ kit front is another Panther-this or Tiger-that. A JS-4? Wow! I mean, the JS-4 was a pretty obscure piece of Soviet armor. Originally developed in competition with the IS-3, the JS-4 (or IS-4, but we’ll stick to the kit name) referred to as Object 245, was, like the IS-3, an extensive redesign of the IS-2. The hull was lengthened with an extra set of road wheels added and an improved engine. The turret and hull were both up-armored. While other alternatives were considered, the IS-2’s 122mm gun was retained for the JS-4. Technical data derived from the study of German wartime Panther tanks was utilized in the layout of the JS-4’s engine cooling system. Although the tank was approved for mass production in 1948, only 200 were produced due to disappointing speed and mobility. Can you say “obscure’? Many of the 200 were shipped off to the Russian Far East in 1950 in preparation for the planned Soviet intervention in the Korean War. Of course, this never came to pass and the remaining JS-4’s remained in the region until their decommissioning in the 1960’s.

So what comes in the box? You get 518 parts of gray styrene plastic attached to 26 sprues. There are also 21 photo-etched (PE) parts (primarily for intake grilles and their frames) on one fret. A metal main-gun barrel and a length of copper cable rounds out the parts list. There is also a decal sheet which allows you to reproduce the tank represented on the color Painting and Marking guide, with alternate numbers and emblems to suit your fancy. By the way, the painting guide has call-outs for Mr. Hobby, Vallejo, Model Master, Tamiya and Humbrol paints.

The parts themselves are crisp and cleanly molded with no obvious flash. The level of detail on the parts is superb and consistent throughout. My only disappointment was with the unditching log, but maybe that’s just me.

Here’s how the parts are presented by sprue:

The 12 page, black and white instruction booklet is logically presented in 17, easy to follow steps, although personally, I’d bounce around between them. Line drawings throughout show you where things go and English translations are supplied. A parts map shows you where all the parts are by sprue and which part (E14) goes unused. Step 5 shows how many track links to use per side with suggested lengths. There’s even a ruler printed in step 9 so that you know how long to make the tow cable from the supplied copper cable and plastic tow cable ends.

Placement of PE parts is integral with the overall steps and they are clearly indicated.

When you first open the box, you’ll notice immediately that it’s jam-packed with well packaged plastic. The turret parts come wrapped in foam in their own little poly bag in a side compartment of the box, along with the individually wrapped hull parts and DShk sprue. To protect from breakage, the delicate front brush guard is wrapped in foam right on the sprue!

As mentioned earlier on, the molding looks top-notch with the plastic itself not too soft or not too brittle - but just right. I have never looked at a Trumpeter armor kit before (I checked my stash) and I have to say that I am impressed - my friends will tell you that that is not an easy feat! I built the Tamiya JS-3 a few years ago for the 2012 Nats and this Trumpeter kit compares very well with that Tamiya offering and even exceeds it with certain supplied details.

Since this is an in-box review, I can’t really address fit, but I did put the turret halves together and the seam line virtually disappears when you hold the parts together. Speaking of which, the cast metal texture on the turret and other areas (like the road wheel faces and gun mantlet) is, in my opinion, nicely done.

I was able to scrounge up just four (decent) photos of the JS-4 on the ‘Net (did I mention “obscure”?) and the kit seems to be quite accurate in overall outline and appearance. One area that may be a bit off is the front, lower areas of the turret, which on the kit appear a bit too ‘clean’. A wee bit of putty can fix that though. Otherwise, I think that the model can be built quite nicely and completely without any after-market help, although there are already PE sets available for this kit. Personally, I’d save my money.

Trumpeter has done a nice job in molding many of the finer parts, like railings and hand-holds - they are nice and thin and, for appearance sake, can be used as-is without wire replacements. Details on the fenders are nicely rendered. The auxiliary fuel tanks are molded in the round, needing only one end to be glued on. The exhaust ends and unused coaxial gun barrel parts are molded open - nice touch. The molding of the upper hull half has to be seen to be believed. Lots of neat , crisp details and terrific undercuts - a marvel in slide molding. The bottom half of the hull is also full of details with some extremely nice weld beads in all the appropriate areas.

The individual track links look great, but I was a bit disappointed by the four sprue attachment points per link, which means some clean up - not too difficult, just tedious. I think Dragon, with their Magic (or is it Easy?) Links can teach other kit makers a thing or two on this front. Again, my only other negative comment is for the unditching log and the way it’s textured. A razor saw blade and some liquid glue can fix that.

PE parts are nicely done. The mesh or screen portions look really good. I really liked that the frames for the intake screens are supplied as separate pieces - it just looks better that way, despite the extra, fiddly work.

I really like this model. Sure, it’s not cheap, but it’s packed with value. It is certainly an off-the-beaten-path kind of subject, but to me, that makes it all the more cool. Even better, it’s not one of those horrible limited run kits. If you’re into Russian armor, or just plain armor or obscure subjects, I can easily recommend this kit.

I’d like to thank Stevens International for supplying this kit and IPMS-USA for giving me the opportunity to do this review.

Fuel Tank Molded "in the round"