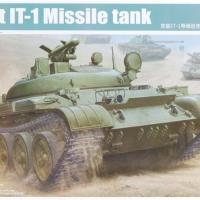 Let me start this out as saying this is my first IPMS review and I hope you find it informative and interesting. The IT-1 was a Soviet Cold War missile tank based on the chassis of a T-62. Instead of a main gun, the tank fires specially designed 3M7 Drakon missiles from a pop-up launcher atop the turret. The vehicle saw very limited usage from 1968-1970. The tank became unpopular with the military due to the limited amount of ammunition and a large dead zone around the vehicle which was created by the missiles minimum range. Eventually the IT-1s were converted to recovery vehicles.

The kit box has an attractive painting for artwork. Included in this kit are an instruction booklet and a color diagram. There are no decals included with this kit. There are 490 pieces on 20 sprues, 14 of which are Trumpeter’s standard crisp grey plastic. You also receive 5 sprues of black plastic, 1 clear sprue for periscopes and a small PE fret. The track has 216 pieces and there are around 57 extra unused parts that this kit shares with other T-62 variants.

The road wheel assembly was a breeze since the rubber tire on the wheels actually is molded separate. Some clean up is required to remove seam lines. Lower hull and suspension assembly was quick and easy. As for the tracks, cleanup was minimal. Tracks for this model were crisp, with very little flashing and light knockout marks. In order to get the proper sag, I purchased the Hobby Trax T-62 track tool, which makes assembly of link to link, link to length, and rubber band tracks much easier. The only problem with the lower hull was step 5, part B26. This should be omitted, for it gets into the way later in step 11.

Once reaching step 11 (a sub-step construction of stowage boxes), I noticed part E18 was different from the drawings. You need to add part F15 to one side of the L shaped part E18. Turret construction had no problems. All parts fit nicely and required minimal clean-up.

The final stages of assembly went satisfactorily with the only notable problems were the rear fenders parts G-2, G-3. The parts contained heavy flashing and knockout marks. Some sanding was required and took care of the issues. Part B–33 (log used for recovery) didn’t fit well under the fenders, so I left it off.

The upside to this kit is that it makes a nice T–62 variant and gives that track sag its due. Construction time was about 14 hours with approx. 6 hours painting and finishing. The down side is no decals are included and lots of extra parts to remove from the sprue to put in the spares box.

Thanks to Stevens International and IPMS/USA for a chance to review this kit.